But I had a great time at Miscon.

Taking up where I left off, the Urban Fantasy Noir panel went better than I thought. One panelist didn’t show, so it was just me and Kevin Noel Olson. Even though I was afraid we’d run out of stuff to say, it turned out really well and we had standing room only. Then I was off to a panel on the nature of Monsters with GRRM, Peter Orullian (my first time meeting him and he has gorgeous long black hair. Wow). Anyhow, there was also Bob Davis, a historian. I got to be moderator, and I thought that panel turned out really well. it was outside on a little stage and there were a lot of people.

From there, a bunch of us went to eat at the Montana club and I got to know Jon Pitts and Anne Gimble a fair bit more. Then back to the hotel where the corgis attracted a lot of attention and learned of a book of great amusement and great competition for Eye of Argon. We read it with much amusement. And with great emotion. Fun.

Eventually I ended up in bed and got up early Sunday. That day wasn’t as busy. I managed to attend a reading but Sue Bolich, Brenda Carre, and Anne Gimble. I also did a reading of my own (which was well attended, thank you so much!) and then I did a panel on the art of revision, which again was packed. After that, we went out with Sue and stuffed ourselves silly and drank too much Cold Smoke (one of the best beers ever). That was followed by attending Sue’s book launch party, then returning to the dining area in order to hang out. We were quite silly and I laughed a lot.

Eventually I went to bed again and up stupid early this morning. Got packed, got the truck loaded, went to breakfast, then I picked up this gorgeous piece I bought at the art show by Tiffany Toland-Scott. I love it. Had to have it. Oh, and there was a book signing in there too, with a whole bunch of us.

I then signed stock for Lady Jayne of Lady Jayne’s books, and was off to my panel on Urban Fantasy with Jon Pitts. That was followed by the last panel of the day, the lore of swords, with GRRM, Ruth Frey, Jon Pitts, and me. I learned things and believe it or not, there was some sunshine. 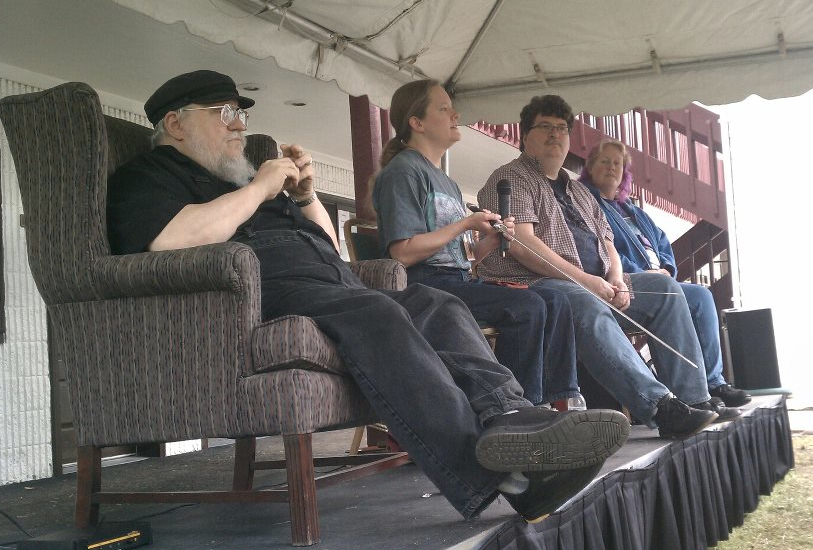 At that point, I gathered up the family and dogs and headed home, and I tried very hard not to fall asleep. That would be bad. Next year the writing guests will be Jim and Shannon Butcher, plus Carol Berg. It’s going to be terrific. You might want to think of attending, and getting your memberships and hotel reservations very soon.

Also, I will have pictures later. And I got a picture of me in the iron throne (Game of Swords) but I have to wait to get those back from the con photographer.