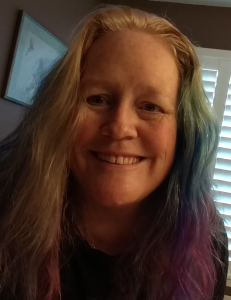 I was raised on a cattle ranch in Northern California (outside a town called Lincoln which is now part of an enormous sprawl). I taught myself to ride a horse at the age of six, as no one had the time to teach me—they were all busy learning how to irrigate, how to cajole an angry bull into another field, how to pull a calf… Afraid of heights, and absolutely sure I was going to die, I managed to scramble up on the back of a very patient and lazy strawberry roan destrier, and plod off into the sunset.

After high school, I attended college after college, racking up a BA and MA in creative writing and a Ph.D. in literature and theory. My very patient and supportive husband traipsed across the Midwest and back to Montana for me (though my husband insists that he’s been running and hiding and I just keep finding him), where I taught for fourteen years at the University of Montana-Western, gaining tenure and becoming a full professor. While there, we mixed genes and had a son Q-ball, who in our humbly unbiased opinions, is the most wonderful son ever produced, and a daughter, Princess Caesar, who is the most wonderful daughter ever produced. We currently live in Oregon where the winters are much warmer and much more green and growing things is a lot easier.

I have a fascination for the Victorians, weather, geology, horses, plants and mythology, I like spicy food, chocolate and cheesecake, and I have an odd and morbid sense of humor. (Or so I’ve been told. Often.) Incidentally, the Pharaoh is in fact my real name, and oddly enough, is of British origin.