We’ve been having a good time. It’s misty in the morning and sunny in the afternoons. Been walking down to the various beaches and enjoying ourselves enormously. Well, mostly. See, I’m sometimes clutzy. My nickname is Clodzilla. Here’s why: 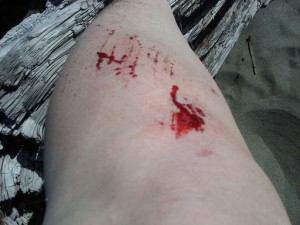 That was just after I took a header on the path. Stepped in a pothole and down I went. Then went down to the beach because, well, I was almost there. I then proceeded to bleed like a stuck pick. I must’ve been pretty freaky to people, but then, that’s always a plus in my book. Walked in the ocean to clean it a bit, which didn’t really, but did hurt. Duh. Kids and dogs had a lovely time and then we went back to the campground and I cleaned up and slapped some bandages on and made dinner.

Dinner was fajitas. It is a tradition on our trips that I will make fajitas for the family. It is actually much easier to do on a campstove then you might think and they always are a hit.

It’s been a lazy week really. I’ve done some reading. The Lady Julia Grey books by Deanna Raybourn are sort of Victorian cozy mysteries and I’m thoroughly enjoying them. I’ve also done a lot of walking and went into an antique mall and wandered around with the fam. I like looking at antiques. There’s always so much history there and it’s really interesting to me to think about how things were used. Plus there’s always stuff from when I was a kid and I think, really? Those are antiques? If only I’d known.

So we go back to Salem on Saturday, after which I’ll have slightly more connectivity. Right now I’m sitting in a McDonalds while the kids eat ice cream and play cards. They are being patient.

The corgis have been having a blast. Voodoo finally discovered he loves water and has been wandering out into tidepools. He’s not so fond of waves. Viggo thinks he’s nuts of course. And they’ve played doggy nascar on the beach and that’s always so much fun to watch.

Still no sale on our house. That’s the only not so great thing.

Getting ready for the coast