this is my ugly toe: 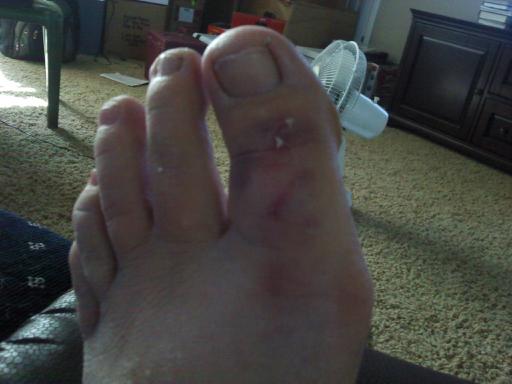 Not sure you can see the bruises that well, but it’s quite purpley blue. I am so talented.

Tomorrow we drive to MT to close on the house. That will happen Weds. God willing and the creek don’t rise, we’ll officially be finalized Weds. by lunch time.

We now have a home phone in the new house. I have a cell phone too, which I probably don’t need that much anymore except for travel, but the kids need to be able to call people and I am not getting them cells. Noway, nohow. I also found two phones to plug in, so we can actually get calls on the new phone, which seems like a pretty good idea.

In other news, I must comb out the dogs tonight. Not to mention pack up stuff in the truck for travel. Won’t need much, but have to make sure the kids have clothes.

Wonder if the toe will get even prettier as it heals?

Moving on up, moving on out