I’ve been meaning to make another RT post with pictures. Obviously I have not done that yet. I still plan to. But I have to resize the pics and that’s going to take a little bit, cause I can’t do that with my laptop. Or rather, I might be able to, but the program I use is on my other machine.

In the meantime, I’ve been getting writing done, doing boy of size health stuff, taking care of girlie who got sick this weekend, and now I’m trying to overcome a barfy tummy myself. The dogs are doing their best to help by laying next to me and looking very cute.

We went to the coast today and walked on the beach. That was fun. Haven’t been in awhile. Boy did okay, though he did have one seizure episode, but it was short. Girlie had a blast. Found all sorts of cool shells and rocks. Also, the seals were begging from the crab fisherfolk. I think one of them thought that the corgi boys were seals that had found a way to run along the beach. I think it wanted them to come swimming.

I finally got a monkey puzzle tree!!! There’s a nursery that specializes in them out near Pacific City, and so we went there. They had some bigger trees that I couldn’t begin to afford. So this one is only about two feet tall max. It’s a slow growing tree, so I think we’re going to put it in a container for awhile until we can decide to figure out what to do next. And that’s to say where we want to plant it or if we can move other things to plan it and that sort of thing. It’s a girl tree, we think. Apparently boy trees have limbs that go down and then up, and girl trees have limbs that go up from the trunk. Gotta have both if you want to make viable seeds. At this point we don’t. The next tree I want to get is a red dragon contorted filbert. I just have to figure out where to get one.

The drag is that summer is quickly approaching for having kids home. That means my writing could get more fouled up than ever. I hope not.

Oh, went to the farmer’s market on Saturday. Bought some pepper plants. Tomorrow I have to get them in and hopefully plant some other seeds. Melons, cukes, and that sort of thing. I may need to go get some seeds. My cilantro and dill didn’t really take so I’m going to have to replant those. My tomatoes are doing super well. I planted them a little too early, but it hasn’t worked against me yet. Hopefully they’ll start setting fruit soon. Oh, and we’re getting strawberries! The blueberry bushes have berries and so does the loganberry. We put in some new raspberries and I hope they get rooted in nicely for next year.

Oh, got this ring at the farmer’s market. It’s made by a fab 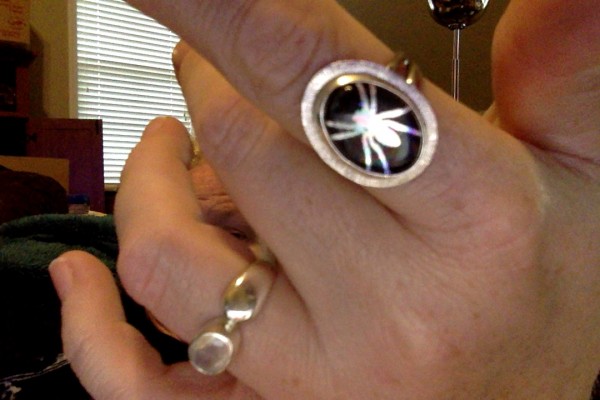 ulous local artist. The ring is silver, the spider is cut from a soda can, and the top is gemmy quartz. I have wanted one since I saw the one she made for herself. I’m working on a spider story and have been forever it seems, and this is motivation to finish. I just love it.

The other ring, btw, I got at RT. You can’t see it well, but it’s rainbow moonstone. I love moonstone and this has really nice rainbow flash.

And a little snippet of something I’m working on. It’s rough, but hope you enjoy:

With a flick of Law’s fingers, the magic surrounding the demon melted. Instantly the creature leaped to his feet, propelled by powerful legs and the sharp downsweep of his outstretched wings.

He faced us. The shine on his skin had faded along with the layer of lubricant goo. His eyes had gone black with small hole of orange in the center, just as they’d looked in Tabitha’s memory. He swayed like he was going to pounce, wings upraised, his bony fingers curling, talons clacking together.

Happy Memorial Day. I am so grateful for all those who serve. I planned a post to talk about it, but I don’t know if I’ll pull myself together, so I’m seizing the day. I’m grateful for those who put themselves in harm’s way for the rest of us. Thank you.