I’m way behind on book reviews. Way behind. I counted. I have at least nine books that I’ve read and haven’t yet written my reviews. Some of the books were really good, some less so, some really less so. I’ll be working on getting those posted over the next couple of weeks. In the meantime, I hope you’re reading some fantabulous books.

Laura Griffin’s Shadow Fall is the latest in a series that I really adore, and this one is no exception. 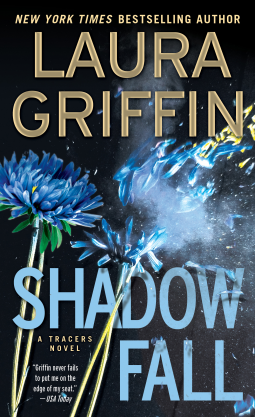 I can’t remember when I first started reading the series, and honestly, I began in the middle (these are stand alones even though some characters overlap and some history is recalled.) They are mysteries and romance. The women are smart, the men are smart, and the mysteries are smart. There’s not a lot of mansplaining or even as-you-know-Bob’s. I find that fairly unusual.

In the ninth romantic suspense novel in the New York Times bestselling Tracers series, author Laura Griffin brings back her elite cadre of forensic experts as they hunt down the most brutal serial killer yet.

Special Agent Tara Rushing arrives at a grisly murder scene and quickly discovers she’s got a serial killer on her hands. The killer is meticulous, making sure to wipe up even the smallest traces of evidence…but the Delphi Center experts are on the case.

The local sheriff has a suspect all picked out—ex-Marine and current security expert Liam Wolfe. Despite all her digging, Tara knows very little about Liam when she shows up at his sprawling Texas compound, which serves as headquarters for Wolfe Security, and she’s surprised by her intense physical reaction to him.

As she and Liam grow closer, Tara finds herself depending on his skills and expertise to help her track a killer. But when another body turns up, Tara must decide if she can trust the man who’s quickly stealing her heart.

I liked the romance in this book. Here’s why. I felt that it built naturally and not just insta-love without any basis in respect or knowledge of the other person. Don’t get me wrong. I believe in instant attraction, but to feed it, you need people who are interesting, likeable, and who you can believe match up. Tara and Liam both do.

The mystery was well done. It wasn’t obvious, but neither was it out of the blue. I hate WTF? mysteries where you never see it coming and you don’t believe that resolution makes no sense.

The tension isn’t just the romantic. There’s the difficulty of the politics of the town and of the law enforcement community. I love the density that gives the story and the way it completely weaves through the other two story lines. Griffin balances all the elements and then brings it all together in a natural crescendo that feels right without being predictable.

Politics and how much I really hate them