The Perfectly Proper Paranormal Museum by Kirsten Weiss is a really fun book. I’d call it a mostly cozy, slightly paranormal romance with ghosts and light on the romance. It’s got quirky friends and a quirky setting and a fun main character. So first, the description: 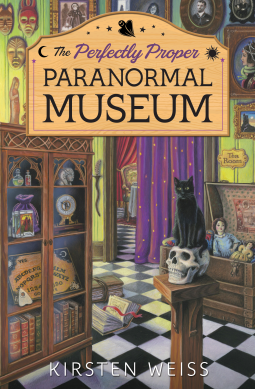 When Maddie Kosloski’s career flatlines, she retreats to her wine-country hometown for solace and cheap rent. Railroaded into managing the local paranormal museum, she’s certain the rumors of its haunting are greatly exaggerated. But a new ghost may be on the loose. A fresh corpse in the museum embroils Maddie in murders past and present.

With her high school bully as one of the officers in charge, Maddie doubts justice will be served. When one of her best friends is arrested, she’s certain it won’t be.

Maddie grapples with ghost hunters, obsessed taxidermists, and the sexy motorcyclist next door as outside forces threaten. And as she juggles spectral shenanigans with the hunt for a killer, she discovers there truly is no place like home.

The book begins with Maddie having lost her job and returned to her hometown outside of San Francisco. She’s not been having much luck, and it’s looking like her former company is blackballing her. She’s at loose ends. In the meantime, her good friend is in the process of opening a shop and needs Maddie to take on running the next door paranormal museum, which is home to an array of haunted objects, including a bunch of really creepy dolls that gave me the heebey jeebies.

Maddie agrees to run it, and wouldn’t you know it, pretty quick a body turns up in the museum. More than a few people have a reason to have murdered the woman, and soon a ghost has Maddie working to uncover the truth. Complicating things is the fact that one of the investigators has a grudge against Maddie.

I enjoyed the book because while it was light, it did have a good mystery, and the characters were developed. The museum was definitely a fun setting and I also liked the added interest of the anti-museum advertisement and the later solution. Definitely a book worth reading.