Who am I kidding? Of course it is. But anyhow, I was supposed to be working on a story today, which I did a little, but I needed to put together an image to advertise The Incubus Job. It needed to be of a certain proportion and I wanted something to catch attention, as it will be in amongst many others.

I haven’t used Photoshop in forever, and when I did use it, I wasn’t particularly good at it (as in, almost lacking all skills). It is not an intuitive sort of program, either. It does, however, let me play at being an artist and also lets me manipulate images and text, so I decided to dig in. Here’s the image I ended up with: 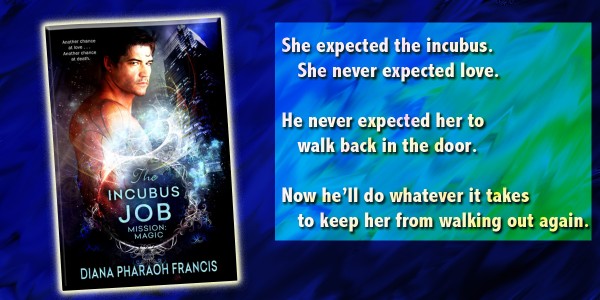 The first thing I did was create the background. I did that using an interesting brush that kind of randomly splotted, and then used a bunch of colors. Specifically, I used purple, red, yellow, and pink. You’ll notice that none of those colors appear in the background. I’ll explain. After dabbing all the colors in, though not entirely covering the background, I took the smudge tool and started smudging. I tried to go at a diagonal, from bottom left to upper right on a slant. I moved the colors both down and up so that the pattern distributed in a way that I liked. Once I was done, I moved on (it still wasn’t blue yet).

I then put in a layer with the cover and managed to figure out how to tilt it, and then I figured out how to make a bevel on it and a glow around it. I arranged those in a way that I liked (lots of options for doing both), and then moved on to the text. I tried out a bunch of fonts and didn’t like most of them. I finally opted for this one, which is a little like the cover font. I managed to make it have a gradient from white to yellow, but I really don’t know how. I was trying to do some different things. I also had to figure out the text, which I finally came up with, though now I wish there were fewer ‘expecteds’ in there.

I figured I was pretty happy, but then managed to look at another one that was much better. More polished looking. I decided that I would at least try to put a lighter color box around the text. It’s at this point that I clicked a button and turned the background blue. I don’t know what I did exactly. But I liked the blue, so I kept it. I managed to insert a layer with the box underneath the text. I colored the box a light blue, and overlayed on the background, it looks like the above.

I then saved and closed out and in doing so, managed to flatten the images instead of keeping a .png which would still have the layers. So I can’t modify this. I’d have to recreate it. What I wish I could do is go back in and make a border around the text box, I’d also like to round the edges of the whole thing.

I think I need to play more with photoshop in general, but also to try to create some advertising materials. Maybe even play a little with some digital art. That could be fun.

I use an older version of photoshop, and can’t afford to upgrade to the monthly fee. I hope I can figure this one out in more depth.

It's a book birthday!