I enjoyed Follow Me by Tiffany Snow. It’s romantic suspense with a fair bit of geekery, which made me happy. Here’s the back of the book description. 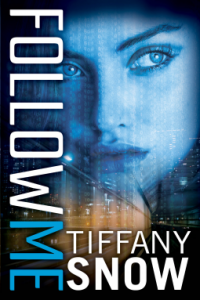 ordered, data-driven life. A computer prodigy who landed a coveted programming job at the cutting-edge tech company Cysnet before even graduating from MIT, China is happiest when following her routine: shower before coffee, pizza only on Mondays, bedtime at ten thirty sharp.

But then things start to get a little…unpredictable.

First Jackson Cooper—Cysnet’s rich, gorgeous, genius CEO—assigns China to a dangerous and highly classified project for a government defense contractor. Her sixteen-year-old runaway niece suddenly arrives in town, begging to move in with China. And then there’s her sexy but oddly unsettling new neighbor, Clark…

Quickly the Cysnet assignment becomes disconcerting—and then downright scary—as key staffers turn up dead. China suspects she’s being followed and isn’t sure whom she can trust. For the first time ever, she’ll have to follow her instincts, rather than logic, if she’s going to survive.

China Mack is a fabulous character. Snow made her feel not only real and interesting, but made her believable as a genius. I also liked and disliked Jackson and Clark and thought the ending was about perfect. The plot of the suspense made sense and didn’t have big holes in the logic. The only major issue that I have, and it’s my own issue, is I’m not a fan of love triangles and I have no doubt like it’s coming. Snow has planned at least one sequel with these characters and there’s no doubt that she’s set up the triangle.

As an additional note, I’m really glad that Clark wasn’t a dick (as he said). Or at least so much of one that he went through with what he was up to. That would have squicked me beyond redemption.

Where does the time go?