I obtained this book through NetGalley.

I really wanted to like this Combatting Fear by Sandy Vaile. The description pulled me in and I thought it was going to be a fun 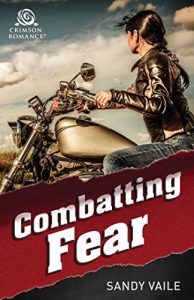 romantic suspense. Plus it’s set in Australia, which was a big attraction to me (though there were no spiders in this book, which I found surprising. Or venomous snakes.)  Let’s start with the back cover copy:

How far would you go to save a child that wasn’t yours?

Mild-mannered kindergarten teacher Neve Botticelli leads a double life. Thanks to a childhood tragedy and her paranoid father, she’s a trained warrior with extreme survival skills who lives off the grid.

When self-made billionaire Micah Kincaid storms into town in search of his son, Rowan, he’s pushy, entitled, and stands for everything she despises. Micah can’t believe a kindergarten teacher is barring the way to him getting crucial information or even just a glimpse of the boy his cheating ex kidnapped. They share only one thing in common: either will do anything to protect the four-year-old, who they soon discover is being held for ransom by an outlaw motorcycle gang.

But as they work together to get Rowan back, they start to see beyond each other’s masks. Could falling in love be even more dangerous than hunting down deadly criminals?

The writing of the book is really good, and the end relationship stuff was well done. Plus there were a lot of elements in the book that worked well. The moments between Tony and Neve especially. The descriptions were evocative and made me feel like I was there. Where I ran into difficulties was with 1) the relationship development, and 2) uneven/contradictory character development.

I’m going to start with the second issue first. Both Neve and Micah were engaging and likeable. But they were also inconsistent and constantly waffled on issues for no good reason. There were no real triggers for much of their–but what if? thoughts. I got annoyed with both of them. Vaile justified their qualms and fears with a solid foundation. I got why Neve was suspicious of Micah and why he’d doubt her–at least at first. But then it kept feeling artificial as they got to know each other and still had the very same doubts without any real trigger for them.

Then Neve is billed as leading a double life. Not really. I was disappointed in that. And that she’s a trained warrior. It didn’t really come across. She’s weepy and nervous and generally sort of passive. And then she’ll have these sudden moments of warrior action and thinking, and then go back to the other. It’s aggravating. The warrior stuff comes out somewhat in the end, but still wasn’t all that warrior-like. I felt a little bit like there’d been a bait and switch.

In the end, I felt the book was okay, but I didn’t come away feeling satisfied.

Food that was made