I’ve been doing some reading off Netgalley recently. I’ve not been getting my reviews up because I’ve been reading. So here’s a bit of a catchup.

The Graves by Pamela Wechsler (May 2 release)

Abby Endicott, the chief of the District Attorney’s homicide unit in Boston, returns in the heart-racing follow-up to Mission Hill. 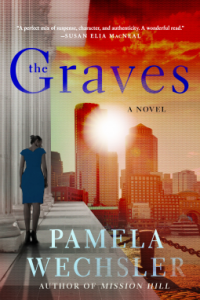 Things are looking good for Abby: she’s top pick to be the next District Attorney, and her musician boyfriend Ty has moved in, despite her upper crust family’s objections. But a serial killer is on the loose, and with two college-aged girls dead and another missing, time is running out. When the sons of a prominent government official are linked to the murders, Abby pushes back, stopping at nothing to find justice for the girls. This time, the killer could be right under her nose, and she may be the next victim.

In The Graves, former prosecutor turned television writer Pamela Wechsler delivers a tense and enthralling Boston-set thriller about the intersection of power, privilege, and justice.

I like romantic suspense and serial killer mysteries, and this looked right up my alley. It’s told in present tense, which can be offputting for some readers. Mostly it worked for me, making the tension more immediate, and discovering events as Abby does.

I waffled on whether or I liked Abby or not. She’s smart, but often seemed shallow. A lot is made out of her figuring out how to live without money since she’s been cut off from her parents’ money for dating a man they don’t like. There were times I got bored and annoyed with that, when I just wanted to tell her to suck it up. She’s had to give up luxuries, but she’s doing just fine. It seemed whiny. At the same time, her shopping addiction seems to mask a deeper pain. I think. I was never quite sure.

Abby’s also cutthroat, which she has to be in her line of work. That can be off-putting too, but in the case of Cassandra and Max, I was okay with that.

The investigation and courtroom parts of the novel were very well done. That’s what really wins in this book. It’s sharp and fastpaced and the killer isn’t terribly obvious, plus you have a stirring in of political maneuvering that adds depth.

The major thing I wished for in reading this book was more of Abby’s internal life. I wanted to like her more. I wanted to care more about her choices in life. As it is, she left me a little cold. On the other hand, I’m hooked enough to want to read the next volume in the series whenever it comes out.

Owning It by Leah Marie Brown (May 2 release)

The chance of a lifetime . . . or just another bad decision? 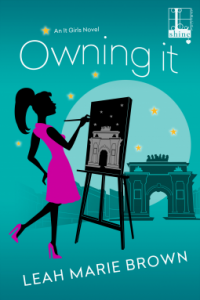 Delaney Lavender Brooks needs to grow up. At least, according to her parents. After getting evicted from her apartment and wrecking her car, Laney is almost ready to trade in her paintbrushes and surrender to a more sensible 9-to-5 existence. Almost. Until she’s awarded an internship at a prestigious art gallery in Paris. What else can the free-spirited artist do but follow her dreams? Even if her latest attempt at chasing rainbows might cost her a real future . . .

Once in the city of lights, Laney is almost undone by the glaring truth: maybe she isn’t sophisticated or talented enough to make it as an artist—or an independent woman, for that matter. And when she’s hotly pursued by a seductive Frenchman, she has to wonder if she’s about to be a fool for love, too. Soon Laney’s greatest challenge is not proving herself to her parents, but having the courage to live the life—and love—of her dreams . . .

I know I’ve read Finding It, another in this series, but for the life of me, I can’t find my review. But anyhow . . .

This is a really breezy romance. Laney is a really fun character and I enjoyed her discovery of Paris and her romance with Gabriel. Laney’s quirky and not entirely put together. She’s often awkward, and she is genuine and kind. I came to care about her quickly. I like Gabriel as well, though for me, he was a little bit flat. Or rather, it felt like I didn’t get to know him very well. The book is far more about Laney’s journey and her maturing.

There are only two minor issues I had with the book. The first is that the slang gets a little bit much for me. I get a little bit overloaded. Not a big deal, though. The second is that I’d have liked there to be a little bit more to the ending. I don’t want to spoil anything, but I was looking for just a little bit more personal exploration.

All that said, Owning It was a whole lot of fun. It’s funny and sweet and joyful.

When the new earl inherits, poor relation Miss Rebecca Bond must wed immediately or be out on her ear. The only man she’s 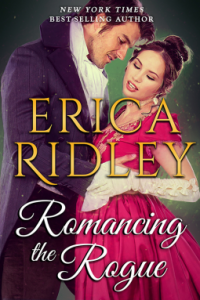 ever loved is summoned to hear the will—but he already rejected her so soundly that they haven’t spoken in years. Yet who better than a rakish Viscount to teach her how to snare a gentleman who appreciates her charms?

Daniel Goodenham, Lord North-Barrows, regrets nothing more than the lost friendship with the one woman who treated him like a man, not a title. Fate has given him the perfect pretext to win her forgiveness—even if it means having to matchmake her to someone else. But now that she’s back in his life, he’ll do anything to convince her to choose him instead…

I should start by saying that I haven’t read an Erica Ridley book that I don’t like, and this one’s no exception. It’s an unusual setup and it took a little bit for me to buy the idea that Rebecca had essentially lived like a ghost in the mansion for so many years. Ridley made it believable, though. I thoroughly liked Rebecca. She has a sense of humor, talent, brains, and strength. She’s in a crap position and she knows it, but she keeps fighting for better.

I didn’t like Daniel much at first, mostly because he’d been an ass before the book started and I was irritated with him before I ever met him. He owned it, though, and by the end, he’s redeemed himself. He’s realized what he lost–and it’s not only Rebecca.