It’s been a difficult couple of weeks. My husband’s uncle fell and ended up in the hospital. Over the course of the following weeks, he’s had surgery and complications and then things looked promising and hopeful, and then bleak, then promising, then bleak. Now he’s going into hospice, though it’s not really clear to me exactly what is wrong. That’s mostly because he’s been very private about his health and now the doctors are discovering things we didn’t know about. The word cancer has arisen, and apparently he’s had multiple small strokes. Anyhow, my husband has gone to help his dad manage things and get his uncle settled somewhere comfortable and where he can get cared for. He fractured a vertebrae when he fell, and broke his nose, and he’s diabetic, so he’s going to need assistance. I wish I could have gone to help too, but the kids have school, I have Orycon and a signing at Powells, and a couple of can’t-miss appointments, and then there are the parent-teacher meetings. So. We’ll be apart for Thanksgiving. At least he’ll be with family.

That’s the bullet we didn’t dodge. On the positive, my husband’s powersteering unit exploded. Okay, that’s not terribly positive, but it happened in the driveway, so he wasn’t out on the road, and my son wasn’t driving it somewhere. I count those as positives.

We also dodged a bullet insomuch as my husband has time he can take off from work.

In the meantime, I’m trying to get people to read my books, as you do when you have a new release and make a living from writing books. So if you’re feeling kind, please consider reviewing my books and telling others about them. Even better, tell me how you like them because I do like to know. And if you have questions, feel free to ask.

In the meantime, a corgi face: 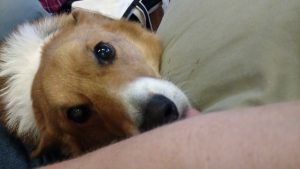 The update of the Saturday