A lot has been happening recently, some good, some bad. I want to thank those of you who’ve contacted me with such positive encouragement on my books. I love you so much.

I’m 8 weeks post op, and I feel pretty good. I’ve lost a fair bit of weight since last May (which is when the process began–presurgery stuff). I’m feeling pretty good when I go out and walk. More energetic. I want to get on my elliptical, but my tennis (knitters) elbow is giving me trouble and so I haven’t gotten on it recently. I’ve tried resting it, icing it, heating it, using different bands and elbow supports, but nothing is really working. Yet. I’m doing some muscle exercises and hoping they are helping.

I start teaching online in an MFA program for creative writing program at SNHU in a couple of weeks. I’m really looking forward to it. I’ve been wanting to get back to teaching and I really like the SNHU program and their approach to online learning. I’m excited to be a part of the program.

It’s been raining something fierce here. For days. This is good, since we’ve not had the usual rain in November and December. Some of the storms have had pretty incredible winds and that makes me so happy that we cut down the tree we had out front next to the house. It was my favorite tree–big and leafy. But the big limbs coming out from the trunk had cracks in them and once we had it cut down, we discovered that two of them were rotted pretty well through, which means these storms we’ve just had would likely have brought them down on the house.

In the meantime, my son was invited to join the honors society at the college he’s attending as part of his Early College High School program (he’s a junior in HS but taking a full load of classes on the college campus). My daughter has been doing super well in her classes and making me really proud of all her progress. She’s always felt like she’s not as smart as her brother, not understanding that 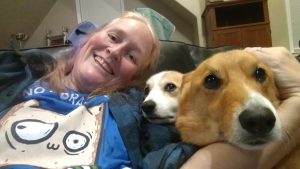 he’s three plus years older than she is, and therefore of course he knows more things because he’s farther along in school. I think/hope she’s finally looking at herself and feeling strong in her abilities. She’s very smart, but now she’s hopefully starting to believe that herself.

The corgi boys are doing well. They are spoiled (more spoiled?) and enjoying forcing me to do their bidding. I’m such a sucker. This is a little selfie of them and me. Voodoo (whiter face) is trying hard to keep Viggo off me (he doesn’t like to share), but Viggo has flung himself down on top of Voodoo and is inching up onto me. Voodoo is very jealous. I think of it as Viggo’s revenge for Voodoo not playing more games with him. Viggo loves to play run and chase and Voodoo always quits before Viggo’s ready.

In a few weeks I get to go to the Rainforest Writers Retreat, which is near Lake Quinault in Washington, and it’s a lovely chance to focus on writing, be in nature, and enjoy the company of other writers. It’s one of the prettiest places on earth. It’s in the middle of a rainforest and the cabin where I’ll be staying with my roomie has a fireplace and right outside is a babbling brook. I love to open the window and just listen to the sounds of the water.