We had our first jaunt out to the park today. Crowley’s shots are finally fully active, so we can do that without worrying about Parvo. They boys had never been and were absolutely entranced. Trying to look at and smell everything, running back and forth like Tigger on speed. They made me run with them in sandals, which is not wise for me, given the enormous and horrible black eye I gave myself while running in Birkenstocks a few years back. I tripped and landed on my face and while I didn’t break my orbital bone, it was awful and I still have a bruise on the bone that hurts. Also, I never did get my foot surgery so the right foot is still unhappy with me walking on it, much less running.

So anyhow, the puppies wanted to run exuberantly. I ran with them. I stopped far sooner than they wanted, but they weren’t unhappy because there were other things to sniff and see and hear and nose and touch. They came home, ate dinner, and then fell into a coma. Once they were rested, they began the evening parkour/MMA event, which still proceeds apace. Pictures of the boys below, sans Voodoo, who is annoyed with them. He has taken to lying beside me on the couch and eyeing the shenanigans with great irritation. I can hear him saying, “Get off my lawn!” 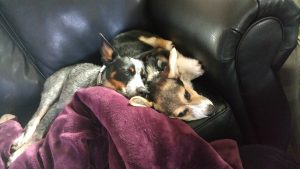 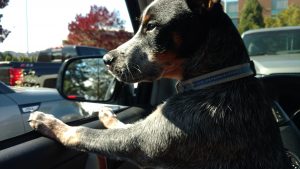 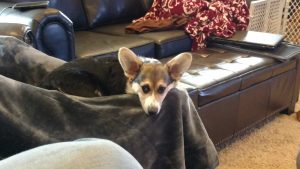 Kavanaugh and the Hearing