I first learned of Thea Harrison when Patti Briggs said I should read her books. Sadly I was slow to get around to that, but discovered I love her writing very much. Still, with so much going on, I didn’t get to read very many of her books, though they remain waiting in the TBR mountain.

American Witch is her upcoming release, and you can get your hands on a copy on April 29th. I suggest you preorder.

So first, what it’s about. From the back cover copy: 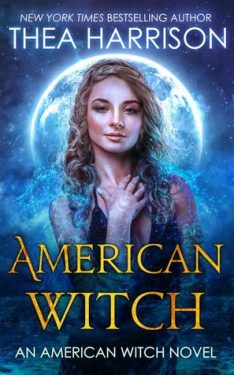 Power can change a person…

Revenge can shape a person…

Josiah Mason is a Powerful witch and the leader of a secret coven with a shared goal: to destroy an ancient enemy who has ruined many lives. Josiah lost years to this man, and his sole focus is revenge. He’s prepared for every contingency—except encountering a beautiful new witch who understands nothing of the immense Power building within her or the attraction she wields over him.

Danger can bring them together…

When divorcing her husband, Molly uncovers a dangerous secret he’s willing to kill to protect. She turns to Josiah for help, and they discover a connection between Molly’s husband and Josiah’s enemy.

As they work together, a spark ignites between them that threatens to become an inferno. But Molly is done compromising herself for any man, and Josiah’s mission is his top priority. And the enemy is cunning, cruel, and drawing ever closer.

As the danger escalates, so does the tension between them. Is a lasting relationship possible? Will either of them live long enough to try?

I loved this book. Found it hard to put down, in fact, which says a lot since I’ve been having trouble reading through to the ends of books for awhile now. This was a compelling read for me.

Molly was an amazing character. Strong, stubborn, flawed, and wholly likeable. She wasn’t a doormat. She’s sharp as hell and brave as well.

Josiah wasn’t your typical asshole. He came off as focused and an ends-justifies-the-means sort of guy. He’d suppressed most of his emotions and to a large extent his humanity over years of seeking his end goal.

Also, neither are super young. They have scars and have earned those scars.

Then he runs into Molly. At first he sees her as a tool, but she doesn’t let him view her that way. She thinks and she argues and she refuses to put up with his habits of being in charge and telling people what to do. This startles him into looking at himself and he doesn’t like what he sees. Their relationship isn’t easy and grows out of respect and admiration. It’s very organic.

The path to their HEA isn’t an easy one and both are willing to walk away at various times, and then they feel compelled to do so for very good reasons. You don’t read the situation and roll your eyes and say oh, please, this could be solved with a simple conversation. No, the obstacles are real and require them both to find ways to bend if they are going to work things out.

I love the magic of the world and the intrigue of the story. There’s more to it to come in future novels. That’s clear. A struggle that will be ongoing and building toward a crescendo at some point. I’m totally planning on being on board for that ride.

I also love the descriptions of their attraction and the sex because its so very emotional. It’s not about the sex and not so much graphic as powerfully written, if that makes any sense.

I highly recommend this book and hope everyone out there will go grab a copy because it’s just that good.