An unlikely pair, an impossible mission, and a hilarious hunt for somebody to love.

Henry was only tasked with fixing the leaky office pipes. So, when a crazy woman barges in and confesses all her secrets like a challenge, he’s faced with two 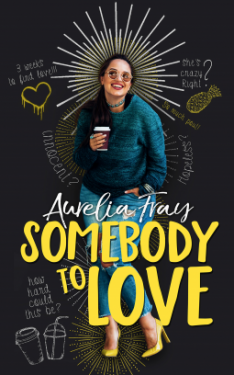 choices: Tell her he’s not the man she’s looking for, or roll with it.

Rachel knows there’s something amiss about her new shrink–he’s far too handsome for starters–but she’s desperate to straighten her life out. With only three weeks to find a date to her best friend’s wedding, she’s willing to try anything. Even rely on a complete stranger to help her find love.

I’ll be honest. I was a little put off at first by Cassy, who I was afraid would be a more prominent character in the book, but luckily, she wasn’t. Mostly she was really obnoxious and Rachel took it laying down in the beginning, which I found annoying. But then she walks into the office and she’s so funny, and so real, and she’s not at all flat or one-dimensional. She’s got some hangups as we all do, but she’s also talented and smart and not at all a doormat. AND she stands up to Cassy at the end, which made me very happy.

I like Henry. Clearly he was an asshole and knew it, but meeting Rachel made him reevaluate himself and his friends. It wasn’t an instant transformation, but one where he grows into love, same as Rachel. His family is amazing, and I’m really hoping Taylor and Neil figure things out. His friends are both obnoxious and wonderful, which I found delightful.

Nobody was perfect, and Henry showed his true colors in a dramatically embarrassing and realistic moment and I may have fallen a bit in love with him at that point, too.

The story is well written, fun, breezy, real, and feel good. It’s fast and I really love Rachel and Henry as people and as a couple. Definitely read this book. I’m going to look up other books by Fray for sure.