I recently read The Dark Bones by Loreth Anne White. It’s a romantic suspense, and I’ve got to say, it’s just about a perfect book.

First, the back cover blurb:

She’s come back to solve the mystery of her father’s death and confront her own dark past. 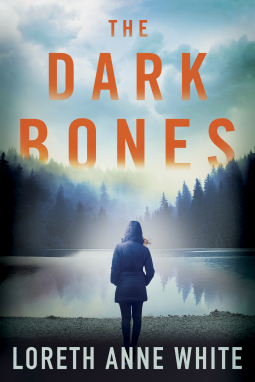 When Detective Rebecca North left her rural hometown, she vowed never to return. Her father’s apparent suicide has changed that. The official report is that retired cop Noah North shot himself, knocked over a lantern, and set his isolated cabin ablaze. But Rebecca cannot believe he killed himself.

To prove it, she needs the help of Ash Haugen, the man she left behind. But Rebecca and Ash share more than broken hearts. Something darker lies between them, and the investigation is stirring it back to life. Clues lead them to the home of Olivia West and her deeply troubled twelve-year-old daughter, Tori. The child knows more about the murder than anyone can imagine, but she’s too terrified to say a word.

And as a cold-blooded killer resurfaces from the past, Rebecca and Ash begin to fear that their own secrets may be even harder to survive.

Like I said, this is just about a perfect book. Why? First, the structure of the story maximizes tension, surprise, and keeps you wondering all the way to the end. Second, the atmosphere. It’s set in a small town in the Canadian winter. The cold seeps into you and the isolation, the dark, and the poverty and lack of resources, along with a sense of claustrophobie: that everyone knows everybody’s business and you have no privacy. Third, the characters. Rebecca’s father comes alive, even after his death. So does Whitney. All the characters are flawed, with compelling stories. Even the secondary characters feel complex and rich. Rebecca is driven, smart, and logical. She’s got a lot in her past to deal with. That’s slowly revealed through the book as she deals with her grief, guilt, and old feelings for Ash.

The relationship between Rebecca and Ash is far more complicated than she is aware of. There’s more in their past than he’s revealed to her, and those secrets continue to drive them apart and as they come to light, implicate him in her father’s murder. Ash is still in love with Rebecca, but a mistake when he was seventeen broke them up and Rebecca can’t forget his betrayal. But she learns more about the past, about a long ago murder, she starts to understand that what she thought she knew was wrong. That she’d interpreted the facts incorrectly.

What I like is that she doesn’t start doubting herself as a cop. She keeps investigating and looking for the truth. She grows and changes, as do many of the other characters.

The addition of Ricky and Tori adds depth and highlights the tension, the atmosphere, and motivations. White weaves all these elements into a complex story that is hard to put down. I highly recommend this book and plan to pick up more of White’s books.