From Liz and Eli Sitting:

Eli didn’t talk a lot, no chitchat, no chain of consciousness patter, no gushy mushy stuff, so she seldom knew where she stood with him. Not that she needed that kind of emotional validation. Not her. Never. Or, she never had before she met Eli. It had never mattered what a man thought or felt about her until now. Maybe because she had never 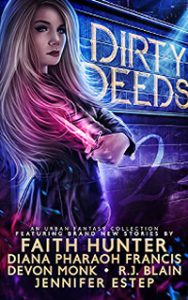 really been in love with a guy, not with that desperate, weak-in-the-knees, want to spend her life with him kind of love.

He’d be gone for weeks, a trip that also involved his political and security work for some kind of coronation involving Jane Yellowrock, the Dark Queen of the Mithrans, the Master of the City of New Orleans, the master of Clan Yellowrock, and more titles, on and on. Jane was a very important person in the world of paranormals, especially vampires, and she had done a lot of good for Liz’s kind too, bringing peace and providing protection for witches that they hadn’t enjoyed in hundreds of years. Jane was also Eli’s adopted sister and, so far as Liz could tell, his best friend.

Liz was just… his girlfriend? Lover? Friend with benefits?

Her mind circled back to the importance of that wedding Eli hadn’t invited her to. She knew that he would be working throughout the planning stages and during the wedding. She hoped the reason she hadn’t been invited was because he’d be working, and not because she and Jane had an uneasy relationship.

Uneasy. Hah. Jane had killed her sister. The fact that Evangelina had summoned a demon and tried to kill her own sisters, and therefore had been targeted with a “take-down” order didn’t help a lot. Evie was dead. Jane was still alive.

Those upcoming weeks when Eli would be gone were looming empty, like a black hole of boredom and loneliness. Calling him for something that might be nothing was just an excuse to talk to him, maybe see him.

Liz looked down at the tracks that had her hesitating.

She shouldn’t need an excuse.

She shouldn’t need to see him either. This was a weakness she hadn’t dealt with before. Ever.

From Putting the Chic in Psychic:

I couldn’t deny I was having a damned good start to the day. My fake mother—aka Aunty Mommy—remained dead and had thus far been unable to rise from the grave and haunt me; my savagely vandalized business was under reconstruction; nobody had tried to kill me recently; my dog loved me unconditionally, as did my three best friends; and I was enjoying the nectar of the gods—aka an extra large 9-1-1 espresso—with a gorgeous man.

Yeah, maybe I had a few problems, but at the moment, I could ignore all of them and enjoy the lovely weather and the very fine specimen of masculinity sitting across from me.

I sipped my ultra-caffeinated brew, eyeing Damon over the rim of my cup. He was flat out hot. Like HAWT.  I’d seen him mostly naked and could attest to six pack abs, broad shoulders, and thighs that could crack walnuts. And his ass. It could make a nun wet her panties. With that body, his dark blond hair, stormy blue eyes, and chiseled jaw, he could have been a model. The fact that he was eyeing me with the same orgasmic appreciation I’d just given the first sip of my coffee made me want to lick him like a lollipop.

Just at the moment, my life was closer to perfect than it had ever been, which of course meant that everything would shortly be going straight to hell. Murphy’s Law and Mercury in Retrograde are the ruling forces of my life. Trouble was always lying in wait just around the corner. At least it meant life was exciting. Often hideously painful, but still exciting. It also meant I knew enough to enjoy the good while it lasted.

I am an almost twenty-eight year old business woman and witch. I run Effortless Estates, a high-end estate liquidation business. I hold wealthy estate sales and have a showroom of the more valuable pieces. Or I did, before a former colleague destroyed it out of frustration, all because I refused to die when he was trying to murder me. Luckily he did succeed in offing Aunty Mommy, which made me almost willing to forgive him for my attempted murder, except he’d also tried to kill my three BFFs—Stacey, Jen, and Lorraine—not to mention Damon and my recently discovered uncle.

Nobody fucks with the people I love and gets away with it. Nobody.

And now for this most AMAZING bonus!

Devon Monk reads all the snippets! This so totally rocks.

This is a very cool TikTok review of Scatter of Light. Squee!