First barfboy returned and thusly spent the day intermittently barfing and sleeping and annoying me. In between barf bouts he always feels good, and then it comes upon him, and voila! Puke.

Also, I fell back asleep today hard on the couch. It was like going into a coma. I could barely wake up enough to answer my son’s questions. I’ve been having some sleep issues of late and I know I’ve had some sinus issues, but I wonder if I’ve actually got something. On the other hand, maybe it’s all that stress from last week coming back to visit and once I get caught up on rest, I’ll be okay. I feel okay now.

The box elder bugs have invaded our house. This is one: 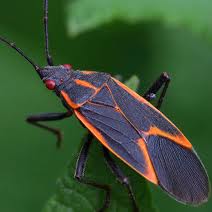 This happens every year. They come in to hibernate and I spend a lot of time killing them and vacuuming them up. They are harmless really, but annoying and they fly randomly at me and really, who wants that? I don’t seem to get them upstairs. They only seem to come into my living room, actually. And my one front kitchen window, but I don’t open that window and so now they are trapped.

Then tonight, the toilet started leaking. We don’t know why. Unrelated to use. But suddenly we discovered water everywhere and leaking down into the basement, and the floor was inches deep. But here’s the thing. It was leaking from the bottom of the tank, not the bowl. I got the water shut off and all the water sopped up and am now running laundry. I’ll see if I can get the plumber out right away and get it replaced. I have an appointment to get that done next week, but of course, it decided not to wait.

Tomorrow I’ll have a guest post by Morgan Keyes (aka Mindy Klasky).