First, let me say that if you’re on LJ, please come over to my post on my wordpress blog so we can all have the pleasure of interacting together. I appreciate it.

Second, there are sure to be spoilers here. So read no further if you are concerned about that. There’s spoiler break. This is your only warning

Third, I can only allow 10 comments in a thread, so this will get messy. Begin a new comment thread and try to indicate that you’re extending the thread or discussion,
maybe quote what you’re responding to if you can. Basically, let’s have a good discussion and let’s be as organized and clear as possible.

All right. I have no idea how to go about a book discussion. But I do have some thoughts about the book that I thought I’d put down and put some questions out there
to begin with and go from there.  First I want to say that I read this book awhile ago when it first came out. At the time I recalling liking it, but I never picked up the
second book. I’m not entirely sure why, though I have some guesses now. 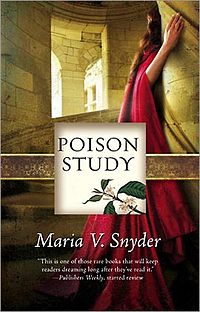 There are a couple things that are going on in this story and I’m not sure all of it works as well as it should. I have some issues, but I also liked a lot still. I rather liked
the idea of a military dominance and some of the effects. Like people choosing educations at 12 and never getting more education than that. No advanced education
is really encouraged, and if you end up not liking your position, too bad. There’s a lot of internal surveillance to keep people in their places. And of course, the Code
of Behavior that is black and white and totally unforgiving. I am really curious about the nature of magic and that makes me want to read Magic Study. I generally
liked all the characters, though I thought the Commander being a woman was a weird twist. It had no groundwork and didn’t seem to have much reason in the novel.

Okay, one issue I had with the Code of Behavior. Killing was always wrong. But Valek is allowed to kill at essentially his own discretion. Yet accidents were not to be
forgiven. There’s no excuse for killing. I was disconcerted about the lack of any confusion by the characters relating to that contradiction. What do you think? Did it
bother you at all?

Another place I was bothered with was the love scene. After all Yelena had been through at the hands of Reyad, she has no issues with sex. That just threw me out
of the story.

I sometimes like Valek and sometimes not. I liked how cold he was in some ways–he had a job to do and was ruthless about doing it–but I did wonder if Yelena should
have felt more betrayed once she found out that a) he’d been in love with her and b) never deviated from his plans and c) waited until it was only necessary to tell her
about the Butterfly’s Dust (a very clever ruse to keep the tasters close and loyal). I would think I would be pretty angry at first, though I can see how she would come around.
But he doesn’t have to offer explanation.

Along those lines, I didn’t believe entirely that he’d fallen in love. It was a little bit subtle for me. Same with Yelena, actually. I liked the way there was a building respect
on both sides, but I didn’t see the romantic elements building as well.

I liked Yelena as a character. I thought she was strong and smart. When she recalls what happened with Reyad that last night, I love that she does exactly what he says
and doesn’t fight. Because she’s a survivor and that’s what you do–you don’t let pride get in the way of survival. The same with how she handled becoming a poison
taster. She’s no fool. How did you feel about her?

I thought being an acrobat worked well into the story and made a lot of sense. I like that she had those skills, also, and could use them to help fight.

I really like Rand and how conflicted he was.

I’m not sure how I feel about General Brazell. He was pretty flat for me as villains go. Reyad’s ghost was more round a character. In fact, I really liked that he was
still present in the story. It allowed for Yelena’s past to still exist in the present.  I felt this was crucial to her overcoming what had happened to her. At the same time,
I’m not sure enough residue of all she’d been through stuck with her. I wonder if she’d have been as willing to be touched by anyone, even casually.

I have more, but I wonder what your thoughts are. What do you want to talk about? What did you like? What didn’t you? Is this book a success for you? What’s
missing? What is too much?