We went shopping today for shorts for my husband.  We were on the way out when this man came into the store. He was large. He wore his shorts cinched very low beneath a large gut and his shirt only came down about 3/4 the way, exposing a lot of skin of the stomach and a fair bit on the crack side too. Now here’s the thing. A lot of men do this thing where their “waist size never changes.” Only it does. But they never buy bigger clothing, they just push the clothes further down and cinch them lower  on the hips to let the stomach have its fleshy way. So I ask my husband, why didn’t the man buy a bigger shirt? His response was first, the man can’t see the gap because his stomach is blocking the way (har har) and apparently the guy has no mirror. But more than that, he’s probably had that shirt for twenty years and as far as he’s concerned, it fits just as well now as it did then.

Let me tell you: it doesn’t. My FIL used to do this (he’s lost weight for health reasons, but never changed his sizes). For a long time he did the exact same thing and let me tell you, I didn’t want to be behind him or in front of him. I didn’t really need to be seeing the parts of him I was exposed to. I have to wonder, do men think that they hit a certain size and it can never ever change? They will never gain or lose weight? Never get a gut? Am I the only one who notices? 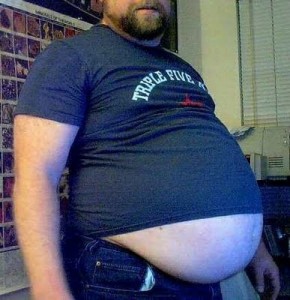 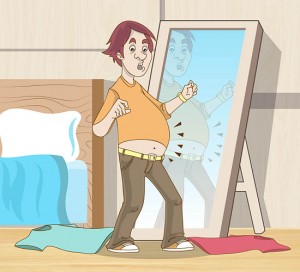