Tonight I was talking to my husband about gender. He says, why should the woman (on the TV) call herself transgender? She’s a woman now, why not just call herself a woman? That’s what she is, isn’t it? I pointed out that she has to talk about it and call herself transgender when she’d probably love to just be a woman, because society demands that she identify as what she was born as. That she has to worry about what bathroom she is allowed to use, and she has to worry about whether she is legally committing fraud if she says she’s a woman, and so on. His reply–*rolling his eyes* that’s just stupid. She’s a woman. All that other is just bullshit (I do love this man).

That brings me to all the crap that’s been floating around the internet this last week involving a certain petition put together by a guy who does not belong to SFWA complaining that now that the SFWA is trying to a) be more professional, b) not demonstrate regular bigotry against much of its own membership and women the world over, c) attempting to be more inclusive and respectful of people of color and women, that it’s being turned into a politically correct travesty of a professional organization. It was much better when the professional organization not only permitted but celebrated bigotry against women and POC. Rah Rah. It’s all couched in terms of political correctness is evil and freedom of speech is being destroyed and anybody who loves freedom of speech should sign the petition. Here’s the link if you want to go have a gander.

My response, in a nutshell, is horseshit. Here’s why. The reason why “political correctness” has been demonized and vilified is because it questions the privileging of certain people, language, religions, and so forth. Why shouldn’t women be called lady-writers and men be called writers? After all, it’s accurate, at least to a point. The reason why it’s offensive is because the language is andro-centric. It privileges male experience as normal and all other experience as other. That means by definition, anything that is not male is other (there’s a lot of logic and theory that sustains this argument and I won’t go into it here.) Male experience is also valued and other experience is not. Let me give you a for example. The typical name for an unmarried man is bachelor. No negative connotations are associated with that term. You could also go with stud, player, gigolo (to play up the sexually fertile idea), all of which are not pejorative. Think of the unmarried woman. Bachelorette–that is the friendliest one, and it still defines a woman in terms of the masculine idea. But look at the other terms: spinster, hag, maiden (which implies virginal, because a sexually active woman is a bad thing) virgin or to go the sexual route–slut, whore, bitch, as only a few examples. (Notice how these terms value women only in relation to their sexuality and relevance to the masculine eye). The language (and the hegemony behind it) perceives women as not-men, which means failed or flawed men. Specifically women are vessels to be filled by men, and if they fail in that regard, they have no purpose (spinster/hag/bitch/slut comes from this perspective). This valuation goes back to the story of Eve. She grows out of a spare part of a man, and not even an important one, and she’s responsible for getting kicked out of Eden because she is too emotional, too greedy, too passionate (I’ve heard it a lot of ways).

I firmly think that the language you use matters. It matters because we create the world through words. We know our world through the language we use. We all know that the old nursery rhyme “sticks and stone may break my bones but words can never hurt me.” Again, horseshit. Think about it. We forget physical injuries fairly quickly, but we can remember the names we were called forever. On top of that, I believe that treating people in a fair and respectful manner is important, but it is fundamental to a professional organization like the SFWA. Yes, I’m a member. The petition keeps talking about a vocal minority that is moving toward these terrible changes that would silence bigotry (but it’s just a joke! Why must you be so thin skinned? Don’t you have a sense of humor?  oops. Sorry, but those sorts of rhetorics are always the excuse for this kind of bigotry). This isn’t a minority. It’s a sea change within the organization. We want professional standards and we want members to meet them in our professional communications. I’d love people to be respectful in all their communications, but I know that won’t happen.

So let me share some things with you. Here’s Mary Robinette Kowal’s account of being harassed as an officer of SFWA. Here is her follow-up to that, given the current petition. A lot of is truly repulsive, repugnant, and disgusting. Here’s The Daily Dot talking about the current situation. Here’s a really good post by Juliette McKenna about why talking about it and why shouting back is fundamental. I’ve been reading a lot of posts about this and reading a lot of really horrifying nastiness on the parts of those who are fighting to keep their ‘rights’ to be shitty people. They squeal freedom of speech and wave flags saying they have a right to say what they want the way they want in any and every forum. Here’s the problem. They don’t. The SFWA isn’t a public organization. It can have civil standards. It can have rules against bigotry. It can say, we will not tolerate the denigration of some members by other members. Not only can it, it sure as hell should.

These same people complain when others take them to task for their speech, claiming freedom to say what they want. That part is true. They can say it. But other people can speak too. One person’s freedom of speech does not negate another’s, and just because you have a right to say it, doesn’t mean I don’t have a right to tell you that what you said was stupid, ridiculous, bigoted, and downright nasty.

So that leads me to this post by John Scalzi.  It begins with this quote:

“The problem is that the ‘vocal minority’ of insects who make up the new generation of writers don’t scramble for the shadows when outside lights shines on them—they bare their pincers and go for the jugular. Maybe it is a good thing that SFWA keeps them locked up. The newer members who Scalzi et al. brought in are an embarrassment to the genre.” — (name withheld) on SFF.net, during the recent unpleasantness.

This quote is meant to be insulting, comparing those who would protest hate speech as insects who refuse to crawl away and shut up when this verbal vomit is spewed forth onto the unsuspecting SF community. In response, John says this:

Mary and I are no longer officers of SFWA, but I think our commissions at the head of the Insect Army are still in effect: After all, not every “insect” is in SFWA (yet). And so I say to you: Join John and Mary’s Insect Army! You must write! You must be fearless! You must stand your ground in the face of deeply silly insults, clacking your pincers derisively at them! And, if you believe that every person — writer, “insect” and otherwise — should be treated with the same dignity and honor that you would accord yourself, so much the better. Together we can swarm to make science fiction and fantasy awesome! 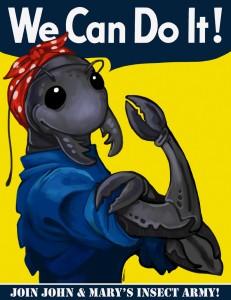 I’ve wanted to speak out on this since it broke, but I’ve had quite the full plate. Boy’s MRI is tomorrow and this weekend he’s backslid. I’ve also had a professional piling on. I don’t have time. Except this is one of the most important things any of us can do–stand up for our ideals. Maybe the nasties believe it’s only a vocal minority because more of us don’t speak up. I have before, and who knows if anyone will look at this blog. Nevertheless, this is my torch lit against the city of dreadful night. Bigotry should be fought against whether we have time or not.