I enjoy reading Lilith Saintcrow. I was looking forward to The Society quite a bit and sadly found myself disappoi 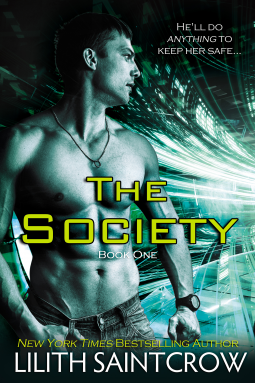 nted. It has a terrific premise, but it wasn’t executed as well as I hoped and then the big one for me . . . Well, I’ll get to that in a minute. First, the book description:

Will she be the Society’s salvation . . . or its downfall?

The black-ops government agency called Sigma broke Justin Delgado, trained his psionic talent, and turned him into a killer. Then he escaped and joined the Society, an underground resistance movement of psions determined to use their talents to bring Sigma down. Competent, cold, and cruelly efficient, he’s the best operative the Society has, a legend among the psions who fight a shadow war against an enemy that owns the courts, the press, and the police. Feared even by his own teammates, hunted by the government, and too damaged to feel anything but clinical rage, he is utterly alone—until he meets Rowan.

When Rowan Price stumbles across Delgado’s team in an abandoned house, he is assigned to make contact with her, bring her in, and keep her alive—because Rowan is one of the most powerful psychics the resistance has ever encountered. If the government gets its hands on her, she could very well mean the downfall of the resistance, because nobody, not even Rowan, is quite sure how far her talents extend.

The Society will welcome Rowan, if she can stay alive long enough to join them. Unfortunately, there’s a traitor buried in the ranks. If the Society goes down, Rowan is at risk. God alone knows what Delgado will do to keep her safe, because Rowan is fast becoming the only thing in the world he cares about . . .

I was looking forward to paranormal action and a thriller element and intrigue. I didn’t get a lot of it. The beginning was promising, with the meeting between Rowan and Justin. But the ongoing story felt like it dragged a bit and didn’t have that much action. A lot of that had to do with Rowan having to learn how to use her powers and to understand the world she’s come to live in. In the meantime, much of the interesting action happened off page.

Then we get to the romance element. It’s slow. And by slow, I don’t mean it takes awhile to build, I mean that it wort of plateaus and stops and then starts again without seeming to grow.

I wasn’t really clear on what Sigma or the Society were up to. I wanted to know more on all of that.

Even so, I was intrigued enough to want to keep reading. Until I got the end when the book just stopped. Not a cliffhanger. Just a stopping. It felt incomplete and unresolved on so many levels. I was disappointed at the end. No getting around it. I’d hoped to have a better experience.

Politics and how much I really hate them