Friday the kids had the day off from school and so the man took the day off and we went to central Oregon to look for limb cast. Those are agates formed when hot ash covers wood after a volcanic eruption. The wood disappears and leaves a void and over time, minerals filter in and create a limb cast. It looks from the outside like petrified wood, but instead of minerals replacing the wood and leaving rings and so on, they are simply molds of the wood that was there. Anyhow, we went looking. We found a lot of little pieces about the size of my thumb, and a lot of smaller chips. Then the man found a Y branch about four inches across. It’s pretty blue. Then later he found a really big piece about five inches long and maybe four across. It’s lovely. 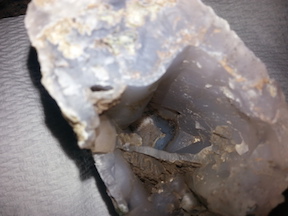 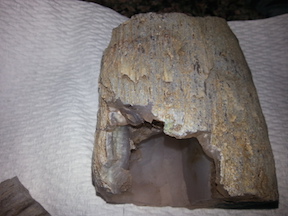 There’s a lot of blue and purple in them. We hope to go back another time and look in some other spots for other colors. 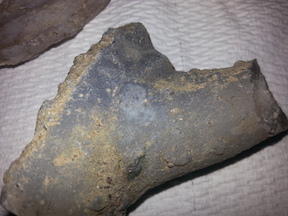 I love rocks, but don’t really know what I’m doing as far as hunting them. So the fact that a month or so ago we found some really cool obsidian and this weekend we found these limb casts was really exciting. We’ve got books and stuff, but I just didn’t know if we’d be able to find anything or that we’d know were to look or what we were looking at.

So Friday was a seriously long day, and then yesterday we went in the opposite direction to the coast and walked along the beach. The day was a little rainy, but then it cleared up for awhile and the waves were lovely and I walked around 5 miles with the doggies. I picked up a few shells and we went to a place called the Crystal Wizard and I got a really cool celestite geode egg and a lovely piece of black tourmaline. I’d like a piece of watermelon tourmaline, but they didn’t have any. We ate lunch/dinner at the Pig-N-Pancake and got home and I collapsed into a puddle.

Somewhere in all that, I tworked my back in a particular spot that tends to annoy me and now it hurt. Dammit. Worst part is that I think I did it sleeping rather than doing anything fun.

The dogs are exhausted by all the traveling in the last couple of days. When we were hunting rocks, we let them out of the truck off leash and they followed us for a bit, then Viggo kept running back to the truck. Voodoo followed me from shade to shade. Then when we went back to the truck to drop stuff off and head up a hill, they jumped inside like they thought we were going to sneak away without them. Goofy beasts.

Today I’ve done laundry and attempted to do some cleaning. Got the replacement mat for under my desk. The old one didn’t hold up. They sent me a replacement that is much heavier duty, so hoping it works better.

In the meantime, I’ve done a couple of minor changes to the website–notice the bar up at the top is now where the menu is. The reason is that I’m writing more and the old menu didn’t leave a lot of options for adding more stuff.

I’m hoping to do more with my newsletter. I kind of stink at thinking what might be nice to include in that. I don’t suppose anybody out there has suggestions of what they’d like to see?

catching up with myself