I’ve been in the mood for some light romance and some Christmas reading. I don’t know why. It’s not even Halloween. Maybe it’s because of the recent shooting here in Oregon, and I just needed some happy, sappiness. Four Weddings and a White Christmas by Jenny Oliver was a pretty fun read and generally I liked it. The key thing is that it was really light and not a lot of deeper emotional stuff.

So the story, as you might have guessed, revolves around four weddings and a snowy Christmas. Set mostly in England with 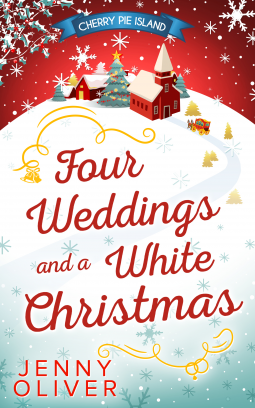 forays to New York City and France, the story revolves around Hannah, a newly-graduated dress designer, who is reconnecting with old friends. One of them saw her graduation project and asked Hannah to design her wedding dress. Hannah, a single mother of a five year old girl, both living with her parents, is looking to have a life and develop her career. She’s eager to reconnect with old friends and that is one of the key elements of this book.

At the first wedding–rather right before–Hannah and Harry meet. He’s a top chef in a New York restaurant. He’s not looking for romance any more than Hannah is. He grew up in a strained household and is struggling to figure out how adult Harry connects with his parents and sister.

Harry and Hannah meet infrequently, mostly at the events of the title (very much like Four Weddings and A Funeral). Harry discovers he’s attracted to Hannah and to her daughter as well. He’s not as anti family as he thought. However he can’t bring himself to want a real relationship and Hannah is working to hard to find roots and a stable life for herself and for her daughter.

Even so, they grow closer, and then Harry’s world falls apart when his estranged father dies. Hannah gets offered a hug opportunity and struggles with finding her feet. In the end, of course, as in all romances, the two find their way to be together.

What was fun about this book was that it focused more on the people growing and changing and as a result, and part of the process, they discover each other. This is a ‘sweet’ romance, with no sexual situations. I’d definitely recommend this one.