Thinning the Herd by Adrian Phoenix is a damned fun book. You’re going to want to read this one. Before I tell you why, let’s start with the back of the book description:

From the New York Times bestselling author of A Rush of Wings and The Maker’s Song series, a humorous, action-packed urban fantasy about a werewolf pack and an animal control officer in way over his head! 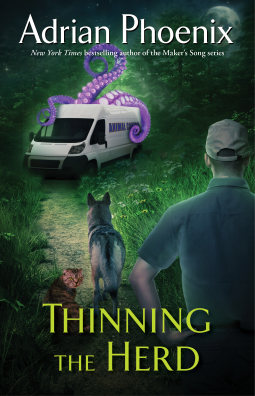 Someone is picking off fortune tellers and hippies in Oregon, snatching them out of their Birkenstocks mid-stride. And when the legend himself, Hal Rupert, Animal Control Officer, gets a whiff of the mystery, he knows he’s the man to solve it. In between proudly wrangling out-of-control cats and dogs, he’s noticed a peculiar uptick in another sort of animal…werewolves.

Hal infiltrates the country fair to investigate the disappearance of the flower children. But his real priority is protecting the love of his life, Desdemona Cohen, whose long purple tresses and black-glossed lips captured his heart the moment he first saw her standing behind the register at Hot Topic. Desdemona may have nicknamed Hal “Creep,” but he’s determined to win her heart. And, you know, save everyone else, too.

So first of all, you can tell from the tone of the description, that this is a tongue-in-cheek sort of romp. It’s entertaining as hell with a lot of fun stuff going on. First of all, Hal is a dog-catcher and his weapon of choice is a catchpole. At first I thought, oh, dear, this could go horribly awry. I should have known better. It’s so fun. Hal is partially a Walter Mitty, slightly delusional and believing he’s a secret superhero, and he’s also a secret superhero saving the world from terrible evil. The mix of his own delusions overlaps with reality in a lovely way.  All the characters are well drawn and–I know I keep repeating this–they are so fun. There’s snark and wit and silly jokes and reversals and seriously, you’re going to want to read this one. It releases on January 4th, and right now the electronic version is only $1.99. I’m telling you, give it a grab. You won’t regret it.