Black Irish by Stephan Talty. I saw this book on some website or other and it looked good, so I bought it. It’s a really excellent thriller. 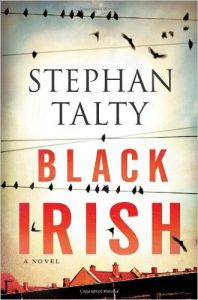 The basic premise is that Abbie Kearney, a police detective in Buffalo, NY, is looking for a serial killer. A nasty one (I love disturbed killers in books). The only trouble is, nobody in town wants to talk to her. The close-mouthed Irish community called the County doesn’t trust her, even though her father is a famous local Irish cop. As the number of killings ratchet up, she gets uncovers old secrets that more than one person thinks worth killing for.

First I want to talk about the mystery and portrayal of Abbie. Both are done really well. I love the twistiness at the end. There were several twists and all of them had well-laid foundation but were still surprises for the most part. The portrayal of characters was realistic and compelling. And there’s a lot of tension, a lot of history underneath everything that drives the various characters. Everybody has been hardened by economic collapse, by loss, by crushed hopes, by feeling of being trapped.

Buffalo has been decimated economically be the desertion of the big steel companies as well as general economic bust. There are few jobs and people are scraping by. Talty pains a poetic and compelling picture of this world, of its people, and of the atmosphere. There’s a richness to the prose, even as there’s a spareness to the writing.

I really enjoyed this book. The mystery was tangled and the world and development is dense and complex. It’s a terrific read.

Possibly on the TMI side