The first book I’m talking about is Mad About Max by Holly Jacobs. The basic story is that Grace is a romantic fantasy writer who 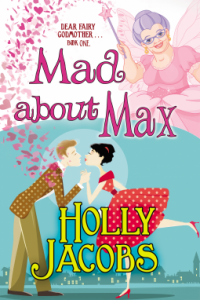 writes fairy tale sorts of books involving three slightly inept fair godmothers. She’s driving home from New York, where she’s just signed a new three book deal, and suddenly the fairy godmothers start talking to her. Apparently they’ve become real. She thinks she’s going insane and decides to contact a psychiatrist. The two fall in love, of course, and face some challenges before a happy ever after.

I wasn’t really a fan of this book. I wanted to be. It was light and breezy, which is what I wanted. The problem was that it was too pat. Everything was pretty predictable and the relationship just wasn’t believable to me. Neither was the big conflict (no spoilers), and the finale just didn’t satisfy. I guess this was a whole lot like cotton candy–a little too sweet and totally unfilling. 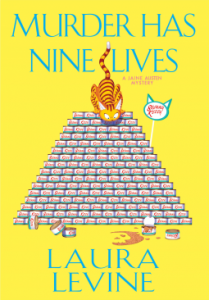 The next book is Murder Has Nine Lives by Laura Levine. In this book, Jaine Austen is a jingle writer and ad writer who meets an animal talent agent in her veterinarian’s office. The agent is wowed by Prozac, Jaine’s cat, and wants her to audition for a diet cat food commercial. Jaine takes prozac there, and one of the developers of the cat food is murdered. Later Jaine finds she is a suspect, and decides she must solve the murder so that she can leave town (cops said don’t) on her planned/booked vacation to Hawaii.

I wasn’t a fan of this one. It’s light, breezy and makes no real effort to develop any characters. Now this may be just what you’re looking for. The writing is really good and there’s a lot of humor and the mystery is pretty good. It’s just a little too shallow for me. I love light and breezy, but I want a little more meat to the characters.

On the road again