Just got back from Montana. Specifically, went to Miscon, the absolutely best con in the world. Well run, and fun people. Love it. I had to miss last year and was so sad about that. Justin Barba–the Con chair–runs a hell of a show.

But let’s begin with the black eye. Because that’s where the con begins. I’m a clutz. Clodzilla is my nickname. So we arrive in Missoula, Montana, after a pleasant drive wherein which we saw deer, elk, and bald eagles. We get checked in and into the hotel room, and we head to the lobby to get our badges. On the way back, the man and kids and dogs were horseplaying and I decided to fast-walk and then run a bit to get to the room before they did. Only just before I got there, my Birkenstock stubbed on the carpet and I went down. Hard. My face bounced off the floor, which seemed to be concrete covered in a thin layer of very thin carpet.

I iced, then we went to the emergency room where it was determined that I did not have any breaks or a concussion, and my wrists were not broken. But they hurt a whole lot. Still do. I posted a progression of pictures on FB. Here are two so you can see. What was cool was that all the swelling and color started on the top side of the eyelid and then slid down below it and low onto the cheek. 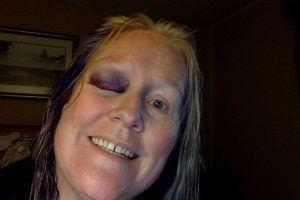 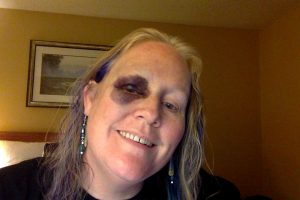 And then my friend from Montana thought it was so funny that she made me a hat to go with it. Here it is: 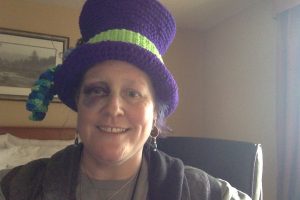 Isn’t it awesome? I’ve got good friends. And she whipped it up in about eight hours. I wore it all the time. Oh, and another thing about Miscon–everybody wanted to help me. Jim Butcher didn’t mind me blaming it on him. Justin Barba brought me arnica gel.

Anyhow, my panels at Miscon went really well. I got to hang out with wonderful friends and fans, meet new ones, and I passed out a lot of buttons for promo. Actually, I passed out a handful and the man and children passed out a ton of them. They were awesome. And this time they hung out at the con more and that was uber fun.

I attended a few panels, particularly those by Clay Cooper, who was doing panels on losing a tail and tracking and guns. I also ate a lot of good food with some fabulous people. The only bad thing was that I didn’t get to spend time with everyone I wanted to. Oh, and I had to skip out on a panel on Monday that was going to be too fun for words. I had to, though, because I couldn’t help drive and so we wanted to leave earlier to allow all the driving during the day and while the man was more awake. The Boy of Size did a bit of the driving, which helped.

Anyhow, I had a great time and tomorrow I have to drive and I’m hoping my wrists can handle it. Been slathering on arnica to help with the bruising. I think it’s helping quite a bit. Though let’s face it, it’s a pretty ugly eye. Oh! And at my reading, I read from the next Job book and even though it was drafty, it was a hit. Yay!

So how are all you doing?

On the road again

Book Reviews: The Good and the Not So Good