This is a really cool anthology that I wanted to share with you. I asked Cynthia, one of the contributors and one of the people who came up with the idea of the anthology, to come and talk to you about Sirens, her story, and the anthology in general. So without further ado, please welcome Cynthia:

My name is Cynthia Porter.  I’m here today to tell you that writing a blog post about Queens & Courtesans: A Sirens Benefit Anthology, is only slightly easier than writing my short story, Affairs of State, that is included in its pages. 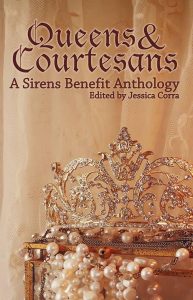 This is the first time I have ever written a story to a writing prompt.  When we created the idea of the anthology, the request was for stories with a Queen and a Courtesan.  None of my current projects had characters like these.  I had to almost start from scratch.  The almost part was because the world I chose to set the story in was one I’d created years ago.  I shifted south of where my other stories have taken place and found myself in a royal court.

I knew I wanted my queen to be a mature woman, not a teen/young woman who has no idea of the trials ahead of her.  I wanted my characters to know who they were, to be confident in their abilities and their lives.

I think I wrote three drafts before my queen character finally got her name.  This is very unusual for me.  My stories are character driven.  Typically I know nothing about a story until I have a name.  That name brings the character’s personality, their back story, their hopes and dreams, and the plot!  With a normal story I’m stuck without a name.  Except for this queen.  She was more than happy to share her story, she just didn’t see the need to share her name with me.  It drove me crazy.  I would talk to her while staring at the story on my computer screen.  “Name, name, name– you need a name!”  She’s one of the rare ones who knew who she was without a name.  I had to work to find a name that fit her temperament.  Not my most difficult character ever, but absolutely one of the most quietly stubborn.  She was the Queen.  What more did anyone need to know?  Her name, as it turns out, is Arcalys.  True to form, it took about four drafts of this post to realize she’d done it to me again!

Lenzienne, or Lenzi, my courtesan, knew exactly what her name was from the very beginning.  She walked into a room, completely furious, and snarled her opening lines.  Her name flowed onto the page and the story followed.

The really difficult characters in Affairs of State were the secondary characters.  Three of them hung on to significant roles in the story.  A couple more exist as, well, names and nothing more.  The others all got cut from various drafts of the story.  Why?  Because they thought they were populating a novel.  I prefer the longer forms of storytelling because invariable my characters bring big ideas, themes, plots trailing behind them—none of which fit into a short story.  Borders, Barriers, Refugees, Magic, all this exploded into larger and larger arcs.  I shoved most of them aside, telling them “later”.  My editor, Jessica, jumped on several more.  She helped me focus what was more of a prologue for a novel down into a short story.

While my queen and my courtesan are happy with their “little” story, I’ve acknowledged that their novel needs exploration.  Once Queens & Courtesans is well and truly launched into the world, I’ll be letting all those characters, all that world-building, all those themes and plots to swirl out from the door where they’ve been lurking.

To get your copy of Queens and Courtesans in print or ebook, click here for Amazon, or  here for BN.

Throws Up Its Leaves

The update of the week