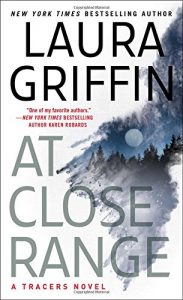 I really love the Laura Griffin books. They are romantic suspense and have great characters and engrossing plots, but hot and compelling romance. At Close Range is the latest in her Tracers Series, of which I’ve read most, if not all. I have to check. This one includes characters from previous b 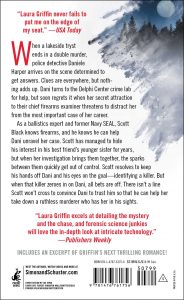 ooks, though it can totally be read independently of any of the others.

The book revolves around a double murder that quickly grows into more murders and a twisted investigation. Dani, our main character, is the lead investigator on the case. This is her first time leading, and she’s very nervous, though also very competent. Scott Black is a ballistics expert and former Navy SEAL who works at a local lab that provides forensic services to law enforcement all over the country. Dani and Scott go back to their teenage years. He practically grew up in their house–her brother’s best friend. His career in the Navy ended with an injury, and now he’s become a primary expert in his field. The two of them have sparks, but he’s not ready to cross the brother-friendship line to mess with Dani, and she’s pretty sure he’ll break her heart.

He is one of the experts called in on the case, but soon is implicated as a suspect. That puts them on opposite sides, because even though Dani believes in him personally, a good detective works on facts and evidence. Secondary characters are introduced and play important roles in the story, all the way to the end.

I didn’t love this story as much as some of Griffin’s previous books, but I liked it quite well. I thought the relationship between all the characters–professional and personal–were deftly written, particularly Dani’s relationship with her fellow cops. Her relationship with Scott had some places that I winced at, but I think that was a personal thing, and overall I thought it developed organically and realistically and romantically. The sex scenes were both hot and emotional, which is an art to do. The only major problem I had with the book was that the ultimate bad guy seemed a little bit farfetched. The twisted plotline was wonderful and kept me guessing, but I wish the ultimate villain had been more on the page pulling strings.

I would rate this 4.5/5 stars and totally recommend it and all the others in the series. Good writing, good suspense and mystery, wonderful romance. I read it pretty much in one sitting as soon as it showed up on my Kindle.

Food that was made