This is a terrific book. Let’s start there. I’ll give you more below, but just know it’s a really good book and you should read it. 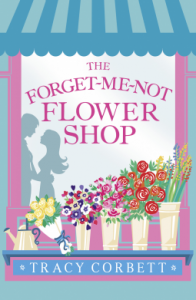 So to begin, The Forget-Me-Not Flower Shop by Tracy Corbett and available July 3, is kind of a romance, but while romance is a part of the book, it’s really about people figuring out their lives and going through difficult times and finding each other as friends and family. So if you’re looking for a strong romantic narrative, it’s not going to be coming. Doesn’t matter. It’s a fabulous read.

Back of Book Blurb:

Evie is busy running the Forget-Me-Not Flower Shop and praying for an uplift in sales as soon as possible. She might be in the market of selling romance, but for Evie a new man is the last thing she needs!

That is until plumber Scott Castillo turns up to fix her boiler. She’s definitely not interested. But then, why does she keep ogling his rather attractive forearms? She’s been fooled before – she isn’t about to fall head-over-heels for some smooth-talker, right?

When he isn’t trying to balance paying the bills with caring for his sick mother, Scott has stepped in to help parent his 18-year-old nephew, Ben. Between that and working full time Scott doesn’t have time for romance. Until he meets Evie . . .

Love doesn’t always bloom the way you expect but for the customers of the Forget-Me-Not Flower Shop it might just be the perfect time for romance . . .

Set in Britain, the book follows Evie’s journey back to independence after a bad relationship. She’s running her dream flower shop, but she’s got a time crunch hanging over her head. She’s got only so much time before she’s got to buy the shop or lose out on her dream forever. She’s also got a chip on her shoulder and is terribly suspicious of men. Scott is a delightful guy, but bogged down in several crises of his own. He’s given up his business and his life in London to care for his disabled mother and his nephew, who’s mom–Scott’s sister–can’t seem to be bothered. His ex-fiance blew him off when he decided to care for his mother, and so he’s skittish of new relationships, but he’s also eager to know Evie.

Things quickly go wrong for both. Corbett follows each through their separate lives, then bumps them up against each other, often with disastrous results. Each of them are putting up fronts so nobody knows just what is going on behind the facades and how difficult things have been and are, and both are afraid of what the other might think. Gradually their secrets come to light and they share, growing closer as friends and maybe something more.

Woven through their growing relationships and acting as foils, are the crumbling marriage of Evie’s best friend Laura and her husband Martin, the passionate and devoted relationship of Scott’s nephew Ben and his soon-t0-be bride Amy, the troubled marriage of Patricia and David Robinson, and the quirky and delightful courtship of Josh and Saffy.

Layered on to these relationships are the friendships that help teach each of the characters–not just Evie and Scott–how to grow and how to hold firm to what they most need and desire.

This story is a relatively slow build, but the pacing is really perfect and the story so well woven that the end is incredibly satisfying. You don’t get any of those “too-stupid-to-live” moments, and when Evie seems determined to be blind or to react irrationally, Cordelia or Laura or Saffy or others are there to catch her up short and point out that her reality is different from what she understands. But you sympathize with her because you see that those reactions are realistic for where she’s been and she owns her mistakes and she doesn’t hide from growth. The other characters find both heartache and happiness–but in the end, it’s all perfect.

I really enjoyed this book and I look forward to reading Corbett’s next book.