I received this book from NetGalley

This one has two elements that really caught my attention: firefighters and Australia. Burning Both Ends by Sinclair Jayne is a contemporary romance and a lot of fun.

Darington Knight has known a lot of loss in her twenty-six years. She can deal, so she resents it when the commander of her 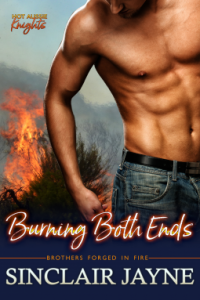 Montana smoke jumper unit sends her on a firefighter exchange program in Australia after her unit suffers a double tragedy. Hooking up with a sexy firefighter her first night Down Under improves Dare’s mood considerably until she realizes her hook up is now her station commander and he has a rule book as thick as her arm.

Lachlan Ryker did not make senior station officer as a Melbourne Metropolitan firefighter by the time he was thirty by acting impulsively, but when he meets the sexy, brash American in his favorite pub, his by-the-book, measured approach to life gets kicked to the curb. He and Dare ignite one night of smoldering passion he can’t forget. But before he can call for a second date, Dare strolls into his station newly assigned to him for three months. Lock knows he has to keep his hands to himself. He never breaks the rules. Dare, however, never heard a rule she didn’t want to shatter.

The opening of the book was a lot of fun. Dare and Lock are at a funeral and the follow up wake. Her grandfather–a well-respected firefighter in Australia–has died. She’s been close to him for years, even after a traumatic experience that left her wounded. He was her anchor.

Though she’s from and American branch of the family, she has a ton of relatives at the wake. She’s arranged to serve in a temporary position in Australia to learn some new techniques. These two meet and there are instant sparks. What I like is that it’s totally believable and totally character based.

Of course things go wrong after, and then eventually they are thrown together with him as her boss. The story goes from there, with each learning trust and learning how to reach out to the other. I thought the end was satisfying and both came together in a real and emotional way. Definitely worth reading.