I’m doing a fair bit of reading. I’ve discovered some new authors that I enjoy and plan to talk about those soon, but I’m behind on some specific book reviews, so I’m going to get started on them. These books are provided by NetGalley.

I was in the mood for a romance, and thought this would be more romantic, but it wasn’t. It was, however, well worth reading. It was a delightful read, despite me having a significant level of annoyance at the beginning. I’ll explain, but first, about the book:

Ella’s life just hit rock-bottom, but can a summer by the sea mend her broken heart? When life gives you lemons… make 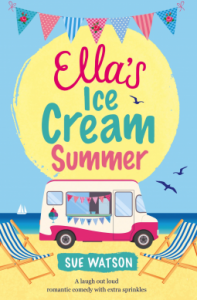 Life hasn’t always been easy for single mum Ella, but she has just hit an all-time low; she’s jobless, loveless, very nearly homeless and, to make matters worse, now the owner of a pocket-sized pooch with a better wardrobe than her.

Packing her bags (and a bigger one for the dog), Ella sets off for the seaside town of Appledore in Devon to re-live the magical summers of her youth and claim her portion of the family ice-cream business: a clapped-out ice-cream van and a complicated mess of secrets.

There she meets gorgeous and free-spirited solicitor, Ben, who sees things differently: with a little bit of TLC he has a plan to get the van – and Ella – back up and running in no time.

In the beginning of the book, Ella’s up against a really obnoxious family. Her mother and her kids seem to be unredeemably selfish and can’t seem to give Ella the time of day. She’s struggling with finances, with the financial demands of her ex, and losing her job. She gets a lifeline in the shape of an inheritance from her aunt. When she finds out what it is, she’s a bit disappointed, but pretty soon she starts to turn things around. She gets a new focus for her life, a new romance, and starts finding a confidence in herself she never had. She also starts uncovering the secrets of her past, secrets that her mother doesn’t want to come to light.

This book was a lighthearted, but very real journey of a woman to find herself and her past. She comes through it all stronger, and her family becomes stronger for it. I enjoyed this book quite. I really appreciated the deepening of Ella’s character and the way she becomes stronger and becomes the anchor for her family and friends.

This next one is a huge change of pace. Don’t Wake Up by Liz Lawler not for the faint of heart, either. It’s a psychological thriller and it hits hard. It’s creepy as hell. It very well may give you nightmares. This is a good thing. It’s well written and well constructed. I’m not going to say a whole lot about it overall, because I don’t want to give spoilers. But first, here’s the description:

Alex Taylor wakes up tied to an operating table. 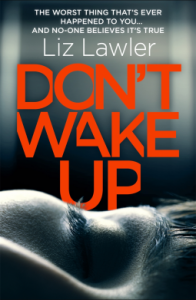 The man who stands over her isn’t a doctor.

The offer he makes her is utterly unspeakable.

But when Alex re-awakens, she’s unharmed – and no one believes her horrifying story.

Ostracised by her colleagues, her family and her partner, Alex begins to wonder if she really is losing her mind. And then she meets the next victim.

You can tell just by the description that it’s going to be pretty terrifying. It was incredibly frustrating to see how no one believes Alex. The plot was complex and the characters were compelling, especially Alex. The end was  satisfying and pulled things together well. I’d definitely read this one if you’re into thrillers.

Lord of Chance by Erica Ridley

Normally I really enjoy Erica Ridley, but I wasn’t all that big a fan of Lord of Chance. 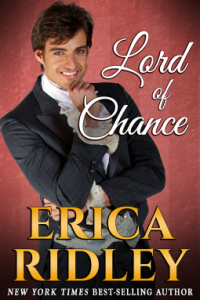 Disguised as a country miss, Charlotte Devon flees London, desperate to leave her tattered reputation behind. In Scotland, her estranged father’s noble blood will finally make her a respectable debutante. Except she finds herself accidentally wed to a devil-may-care rogue with a sinful smile. He’s the last thing she needs…and everything her traitorous heart desires.

Charming rake Anthony Fairfax is on holiday to seek his fortune…and escape his creditors. When an irresistible Lady Luck wins him in a game of chance—and a slight mishap has them leg-shackled by dawn—the tables have finally turned in his favor. But when past demons catch up to them, holding on to new love will mean destroying their dreams forever.

So to begin, I didn’t have a lot of respect for Anthony Fairfax. He’s a gambler and he seems to be reckless and stupid. Charlotte is a good character, but I find it a little bit unbelievable that she gambles in a public inn with strange men or that they let her, or treat her like a lady. It just struck me wrong. I also wasn’t all that engaged in their relationship or in the ending. For me, the story just didn’t have the fun and quality of characters that her books usually have.

This next one is paranormal romance and part of a longer series. It’s called Wicked Kiss by Rebecca Zanzetti.

Working as an informant for the DEA, Victoria Monzelle is used to living on the edge. But she’s not a big fan of getting 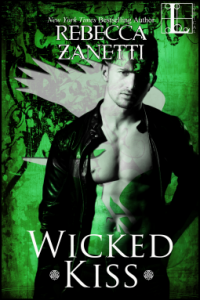 kidnapped. And definitely not by a bunch of bad boy witches with fancy-colored fire to shoot at people. So when Adam Dunne shows up and claims to be a witch enforcer, she’s not going to put her life in his hands based on his word, no matter how smooth and smart and beautifully Irish his words sound. But on the run from a tribunal of witches, she isn’t going to make it far . . .

Before she knows it, Adam’s word is all that stands between her and execution. Sophisticated, just-gotta-ruffle-him Adam has vowed to make her his one eternal mate, wild and unpredictable as she is—to save her from a sentence of certain death. But Tori isn’t interested in being anyone’s pity date. And if they think she’s unpredictable now, they should see what’s coming next . . .

Let me start by saying there’s a lot to love in this book. I’m just not sure they overcome the flaws.

First, Victoria is an informant, but she’s definitely unwilling. I went in expecting her to be more savvy about crime and etc., but really, she’s not at all. But that isn’t really a big issue for me.

The book begins right in the middle of the action and Victoria and Adam have definite chemistry and they definitely don’t get along. This has a great deal to do with the secrets that both are hiding. Now there’s no getting around that Adam is the overbearing alpha type and while challenges him frequently, too frequently for me, she ends up discovering she should bend to him. Now this is a fundamental part of the story because the (steamy) sex scenes are definitely themed with a master/submissive bondage thread. I don’t have a problem with that, except that for me, Victoria comes off as kind of weak because she gives into him sort of against her will (despite being incredibly turned on), and so she has no ability to say no or have boundaries. The idea is that he will know what she needs (submission-wise) and that he knows better than she does what to do and what she should do. That bothers me.

Victoria is constantly doing things that seem strong, but then gives up her power to Adam because I’m not sure why. There is supposed to be this equality between them, a balancing, but I don’t see it.

Plotwise, I liked a lot of what was happening. I thought the whole motorcycle gang thing was a little bit iffy, and I definitely thought Victoria’s “boss” was way out of line. I thought the Witch Council thing was cool and I thought that the story of the drug and the other realms of supernatural were cool. I was annoyed that Victoria had relatively little to do with the resolution of the story–again Adam is dominant. I guess I feel like she kept losing herself and that just didn’t work for me.

I’m torn about my feelings for this book because the writing was so good and the plot was really cool. But. I’m not sure I want to read more of the unbalanced romantic relationships. I just have a lot of trouble with it.