I’m so behind on book reviews, but here are three to start getting caught up.

I’m in the mood lately for lighter fare, though I’m also loaded up with mysteries, so we’ll see if I go there soon. Anyhow, first books first. I received these from Netgalley, so you know.

This first is actually a paranormal mystery: Hide and Seek by Allie Harrison. (FYI–the publisher is the same as some of my books). It’s available now.

Here’s the back of the book blurb:

Can she stop a killer before he takes over her thoughts?

As a child, Tess Fairmont learned the horror of her psychic gift—the ability to not only see, but experience the last moments of a 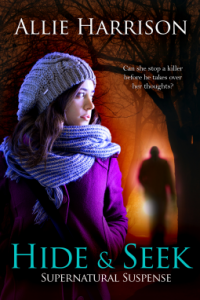 murder victim’s life when she grasps their hand. Now, as an adult, Tess has learned to live with the curse of her ability and does what she can to help the Chicago PD solve murder cases.

But when she uses her talent to help stop a serial killer, she finds there are things more terrifying than her visions . . . like a serial killer who can connect with her psychically. She soon finds the only place she is safe is in the arms of the medical examiner, Dr. Michael Adams.

Until the killer makes her his next physical target and forces her to play a deadly game of hide and seek.

I really liked the premise of this book and Tess’ talent is really unique engaging. This is a romance as much as a mystery, and I enjoyed both sides of the story, though Michael comes off a little as too good to be true. The killer is creepy and his interactions with Tess become increasingly tense and scary. I do wish there’d been a little bit more obvious connection between the killer and the victims, but the backstory did fit and made sense, plus since Tess is a random element to his story, it works. All in all, it’s a fun read (well, also creepy) and I recommend it.

Next is a cozy mystery with a CORGI! Can you guess why I requested to review the book? I mean, a corgi. Anyhow, this book is Much Ado About Murder by Elizabeth Duncan, available in November 2017. 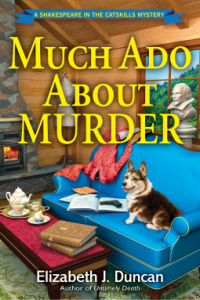 designer Charlotte Fairfax has another murder on her hands as she prepares for the latest performance of the Catskills Shakespeare Theater Company,Much Ado About Nothing. The company’s steady growth enables them to cast star British actress Audrey Ashley, who arrives on scene to play the lead role of Beatrice. But things immediately get more complicated when Audrey insists the company replace the current director with new, up and coming British director Edmund Albright. Edmund plans to change the popular romantic comedy, which alienates several people associated with the production. And the list of people he upsets only grows: the laid off former director, the hotel owner’s secretary, and even Audrey herself. Just as Edmund’s plans are about to come to fruition, his body is discovered on his sofa, holding a gun in his hand. His death is quickly ruled a suicide but Charlotte thinks otherwise. Why would Edmund, on the brink of greatness, kill himself? And in such an American way? With a whole cast of characters to investigate, Charlotte is determined to unmask each one before it’s final curtain call on the whole production in award-winning author Elizabeth J. Duncan’s third Shakespeare in the Catskills mystery,Much Ado About Murder.

First, I read this a couple months ago so I’m a little fuzzy on the details, except the corgi is Rupert and very cute. Anyhow the setting for the book is a lot of fun and I really like that Charlotte is not a young thing. The relationships between the characters are real and quirky and I really felt like I was there at the inn and theater. I’m afraid I figured out the murderer a long way in advance, but that’s okay because it was more about the process and the characters than the whodunnit for me. I enjoyed this book too (if I’m honest, I find myself putting down a lot of books I don’t care for these days, but I don’t write about them because my reason for not liking them is more about where my head is right now than the books).

I finished The Christmas Holiday today. Yes, I’m in the mood for Christmas stories. I’m fond of romances and sap and Christmas stories tend to be full of both. Maybe I should explain that a little. By sap, I mean heartwarming, with friends and family and of course, an HEA.

The Christmas Holiday by Maxine Morrey is available now, and is a fun book. It’s got a British flair, which I enjoyed. Plus it had exotic elements as the characters travel to a variety of places.

But before I say more, the description:

Fall in love this winter on a romantic trip around the world ending in a fairy-tale winter wedding!

As winter comes to London, journalist Mia Walker is desperately hoping for her big break as a travel writer, dreaming of 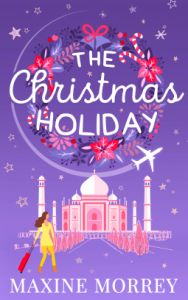 exotic locations and sun-soaked beaches. When she’s invited to write a romantic travel piece that ends in a huge winter wedding in London, she jumps at the chance. The only trouble is, the photographer is renowned adventure-junkie Hunter Scott, who Mia last saw five years ago when she ended their engagement.

It’s the opportunity of a lifetime, and Mia knows she’d be mad to say no – even if it does mean spending weeks travelling round the world with the one man she never wanted to see again! But as the wedding approaches, and the magic of Christmas begins to take hold, Mia can’t help looking out for mistletoe – and wishing she hadn’t cancelled her own engagement after all…

I wasn’t sure at first how much I was going to like this book I liked Mia, but some of her bickering with Hunter seemed to go on far too long and seemed a little juvenile on occasion. But then Morrey seemed to settle in to the story more, and I really enjoyed the romance. This is not steamy at all, for those of you who want to know. There are kisses, but everything else is off the page.

I enjoyed the interactions between Liv and Sandy a lot, and between those two and our unhappy couple, Hunter and Mia. This book was a slow build and the solutions and sorting out the problems didn’t come quickly. It felt very real because of that, and yet I didn’t get bored for that slower pacing. I will say that at first I thought that the whole problem between them could have been solved long ago with a conversation, but as things developed, it became clear that a conversation wouldn’t have really done enough. Both needed to grow up some, and both needed to learn some life lessons of their own.

I definitely liked this book and I recommend it if you’re looking for a relationship read, with the emphasis on relationship. 4/5 stars.