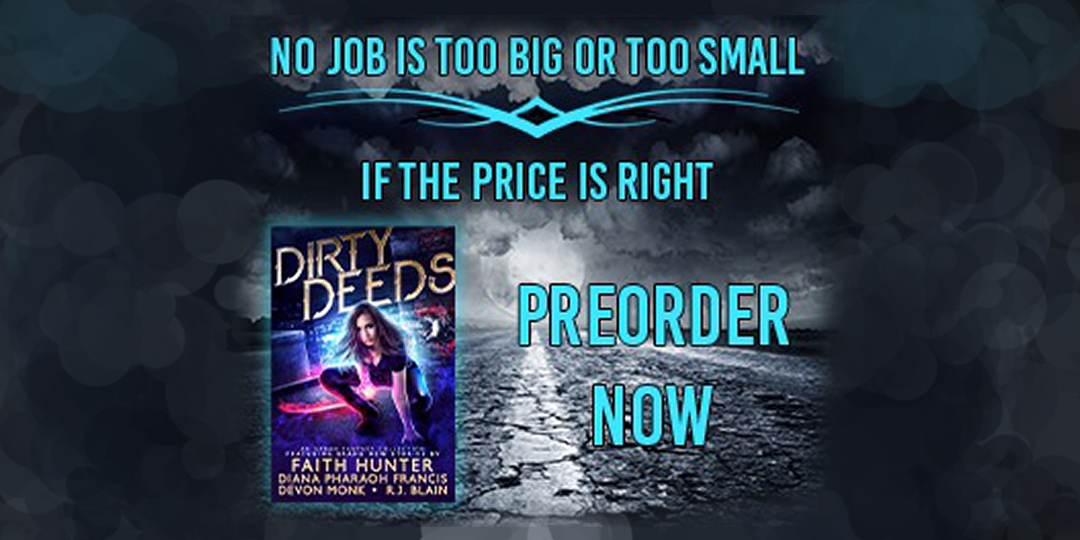 Are you ready for it a fabulous book? Let’s whet your appetite if not. Here are TWO snippets, one from Devon Monk, one from Faith Hunter. You’re going to love them! And at the bottom of this post, you’ll have some Buy links so you can rush right out and preorder. It is gong to arrive on the 12th!

Here is a teaser from Faith Hunter’s Bound into Darkness, releasing January 12, 2021 in the Dirty Deeds anthology. Enjoy!

Sometime between books 13 and 14 of the Jane Yellowrock Series…

Liz Everhart finished the email, tucked her cell into a back pocket of her jeans, ignored the weird buzz of blood-curse taint that still pulled at her flesh, and tried to decide who she wanted to call for backup on this gig. Finding a lost dog sounded easy on the surface, but it could involve hiking up and down mountain ridges, maybe camping overnight, and then hauling a seventy-pound, possibly wounded dog back to civilization. That wasn’t something she wanted to do alone. Liz dialed her twin, Cia, and discovered she was spending the weekend with her boyfriend, so help on that quarter was out. Her other sisters were covering the family business, Seven Sassy Sisters’ Herb Shop and Café. That left asking Jane Yellowrock, who she didn’t particularly like, and who was way too busy being some big hoo-ha in the vampire world. Or she could ask the man who had been avoiding her for weeks. Yeah. Him. She thought about being rejected again. Or, not so much rejected, as suddenly, inexplicably ignored.

Staring out over the vineyard, watching her older sister, Molly, work, she remembered the various comments he’d made a month ago, ones that suggested he was now totally disinterested. She didn’t know what had happened, except that he’d been in some pretty dangerous situations protecting Jane Yellowrock. Maybe he really thought the danger to “civilians,” as he called people who were not part of Yellowrock’s vampire-human-witch clan was too great for her to handle.

Come to think of it, his apparent disinterest had come almost immediately after her bout with viral pneumonia. He’d been there for her while she recuperated, then he’d pulled back. Son of a witch! That was it. Because she’d nearly died, he thought she couldn’t keep up with the danger. If she hadn’t caught him looking at her a couple of times, she would have believed he’d changed his mind about them being together and become oblivious to her. He thought she was weak which might be worse. Stupid man.

Down the hill, Molly stretched hard and blew out. She’d been hired to talk to the vines to help them grow. Molly was an earth witch and, when she talked to plants, she actively pushed her earth magic into the soil, into the roots, encouraging them to good health, to seek out proper nutrients. She gave them a boost of life. Liz wasn’t an earth witch like Molly, but even she could tell the land here was well cared for, happy, and productive, in part due to Molly “talking to the vines.” Yellowrock and her consort, George Dumas, should have a good crop come harvest time. Aaaand she was wasting time.

Liz trudged back up the terraced incline to the big inn where Yellowrock Clan wine label originated, and which housed the Yellowrock Clan itself: a mixed para clan that did crazy stuff trying to keep the human versus para war from erupting here like it had in other parts of the world. Politics. Liz hated politics. Wasn’t real fond of vamps. But Yellowrock’s adopted clan-brother, Eli Younger, the man who had been avoiding her, lived here. That ornery man made it worth the trip from Asheville.

It wasn’t a hard climb, but Liz was huffing by the time she got to the house. It was early fall and the humidity, even in the hills above Asheville, was in at eighty percent with temps near ninety. And while Liz’s lungs were better, thanks to witch healing, they were permanently damaged from the trauma that resulted when her now-deceased elder sister Evangelina dropped a boulder on her in a magical fight over a demon. She had nearly died. Her other sisters had saved her from instant death. Yellowrock had made sure she had vamp blood to sip to speed the healing. But even with continued healing blood and healing workings, along with her niece’s prayers, trauma was trauma.

Here is a teaser from Devon Monk’s story, set in the Ordinary, Oregon universe:

I parked the Jeep and stared through the rain at my almost-uncle, Crow, who was actually the trickster god Raven. He was waiting just inside the mouth of the tent he’d set up in front of his glassblowing studio. As if he’d been expecting us.

“Ten bucks it’s all stolen.” My youngest sister, Jean, wore a beanie over her blue hair, the bangs across her forehead making her eyes sky bright. She had on a puffy jacket with her badge on it, just like me. Although my badge said Chief Reed and hers just said Officer Reed.

Crow wiggled his fingers at both of us. His smile was white against his russet-tan skin, and his dark hair hung past his shoulders. He’d braided that hair and added a feather earring to his outfit today. Crow feather, of course.

“I mean, sure,” I said. “At least some of that stuff must be hot. This is Crow we’re talking about. But what I can’t figure out is the whale.”

We both leaned forward to better see out the windshield.

The January wind buffeted the Jeep hard, rocking it on its springs. Rain hammered down on the metal roof like rocks thrown from the heavens. A storm front was pushing in off the Pacific. Torrential rain would hit by tonight. Then we’d see winds clocking in at sixty miles an hour and gusting to eighty.

“The whale I understand,” Jean said, as we stared at the tent. “It’s a tent, we’re a beach town. Matchy-match. But why is it that… color?”

She nodded. “Don’t get me wrong, I love me some color, but there’s something about that thing that makes me want to stab it.”

The hot pink whale flapped its obscenely large mouth, flailed its flippers, and flipped its tail like it’d just heard Jean’s threat and was trying to swim away.

But no matter what Jean or I thought about the thing, there were people moving around inside that ridiculous tent. Shoppers couldn’t resist a bargain, even in this weather.

Crow, still watching us, pointed upward with both hands.

The whale’s head was topped with a blow hole, and out of that sprayed blood red streamers. An additional banner near the startled whale eye declared: whale of a sale

“Is this an exploding whale thing?” Jean asked. “Because we weren’t the town that blew up that rotting whale in the seventies.”

The damsels bring the distress in this UF/PNR collection. Dirty Deeds can be preordered at the following vendors: