Time to get down and dirty with your Dirty Deeds Anthology!

It’s confession time. I didn’t quite get Elf Job finished in time for this release. I’m hoping like hell to get it to you in the next few days, but until then, please don’t kill me too hard. You can get this limited time only anthology 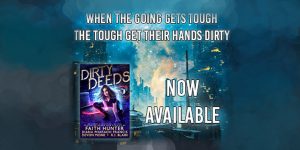 (it goes away in six months) now. Today. Tell everybody you know because you’re going to love it. For one final little teaser (you can read snippets from each of the authors in my previous blogs) here’s one from RJ Blaine from her Magical RomCom

with a Body Count series:

After a long week of work, I couldn’t really blame anyone for grabbing fast food on the way home, but did everyone in Long Island have to visit my specific branch of McDonald’s? From vanilla humans, lycanthropes, practitioners, and centaurs, to devils, demons, and even an angel, everybody wanted a hit, and they wanted me to give it to them.

I questioned the angel. How could they eat without a head? Did they eat? Why did an angel want nuggets? Why did everyone want nuggets today?
While all the lines were busy, mine had twice as many people, and I doubted I’d survive to the end of my shift in an hour.

I considered asking some divine for help, but I opted against the idea. With my luck, the devil would join the mayhem and give me one hell of an order.

The nuggets held the place as the day’s reigning champion of sales, with the smart people ordering twenty, as it was approximately fifty cents more expensive than ordering ten. Burgers took the second spot of the day, and the underdog salad came in a close third, resulting in general mayhem in the back, as we hadn’t prepared for a salad bender.

Oddly, the lycanthropes led the charge on the unexpected salad bender. Had someone slipped pixie dust into our dressing when I hadn’t been looking? While filling an insane order consisting of a hundred and sixty nuggets, ten fries, and enough soda to float a boat, I checked one of the labels to make sure.

I could’ve used a hit of pixie dust, but for some damned reason, the CDC got cranky when those infected with a contagious life-altering disease became snuggle fiends. My driver’s license specifically barred me from ingesting any pixie dust without a prescription, the cruelest of blows in my life outside of my accidental infection with lycanthropy. Pixie dust turned me into a snuggle fiend out on a mission to love everyone, making me a high infection risk.

They would consider removing the flag after I mated, as they believed I would become a snuggle fiend with my mate, something they viewed to be acceptable.

I hated the CDC, especially as my virus agreed with their idea.

The damsels bring the distress in this UF/PNR collection. Dirty Deeds can be had at the following vendors:

Let Me Tell You a Little About The Pixie Job