First, the signing was fun. Not a lot of traffic, but then again, there was a lot of stuff going on in town last night and I knew there would be some limitations. But books were sold, fun was had, and I laughed quite a bit.

Then we got home and around 10 p.m., we got a rescue dog. His name is Guster, and he’s a littermate for our boys. Apparently the people who had him moved and couldn’t keep him, and took him back to the breeder. Her dogs were picking on him something fierce, so we took him in. He will be leaving in 6 weeks to go live with my parents who had one of their dogs die of age last year and they’ve been looking for another corgi. They wanted an adult and not a puppy. I think Guster will make them happy.

He showed up with a distinctive skunk smell. We washed him in hydrogen peroxide, baking soda and dish soap, but it didn’t work. I either got the mix wrong, or the baking soda was too old. So this a.m. we called the local groomer and she got him in at 8:30 this morning. He probably had never been brushed. She said he essentially had doggie dreadlocks. He also has a ton of little scabs all over him from being bitten and it looks like he’s got a little notch out of one ear from an attack or who knows what.

He’s very sweet and loving, but is scared of collars. It’s almost like they dragged him by the collar or that they grabbed his neck a lot. He wants to please and he does like the couch. My dogs were a bit suspicious of him, but they haven’t picked on him at all and in fact are trying to coax him into playing. Guster doesn’t know how to play. He also doesn’t know what the leash is for and is terrified of it. We got him a harness and we’re going to be working with him.

Here’s a picture, if I can get it uploaded. 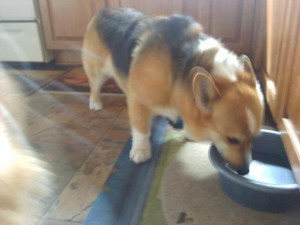 And now for the request. If you happen to be shopping on Amazon, will you use one of my links to click through? The reason I ask is that I earn money back from that and I want to give away books and gift cards to you. I figure that if I can collect enough money, then I could do a giveaway once a month. With a gift card, the winner could get whatever they wanted. Anyhow, I would appreciate it if you thought of that if you happen to have something to buy on Amazon.