Yasmine Galenorn, fabulous writer of, well, a lot of great books, but most notably the Indigo Court Series and the Otherworld Series, has consented to guest today (no threats or arm twisting was involved–well, not much, anyhow). Please welcome her! (note that this should have been posted earlier today, but I’ve been pukey sick and therefore behind). 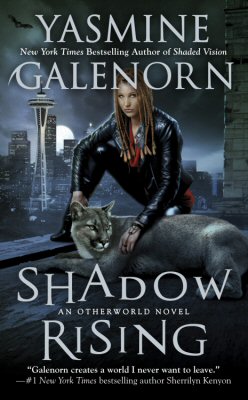 First, thanks Di, for having me on your blog—and yes, I’ll be having a giveaway at the end of it.

For those of you who don’t know me, here’s the official blurb: New York Times and USA Today bestselling author Yasmine Galenorn writes two urban fantasy series for Berkley: both the Otherworld/Sisters of the Moon and the Indigo Court series. In the past, she wrote mysteries for Berkley Prime Crime, and nonfiction metaphysical books. Her books have hit the New York Times, the USA Today, and the Publishers Weekly bestseller lists numerous times. Yasmine has been in the Craft for over 30 years, is a shamanic witch, and describes her life as a blend of teacups and tattoos. She lives in Kirkland WA with her husband Samwise and their cats.

Now that we have that out of the way…

I’m a writer. Storyteller. Bard who works in print/ink/the written word. Dreamer of dreams, weaver of words, witch of the wild. I spin my dreams into stories into words into books. As arachnophobic as I am, I very much appreciate Arachne and Grandmother Spider—for they are the muses of story.

From the time I was three years old, I knew I wanted to be a writer. I remember the day—something, somehow triggered the realization that people made the books I was learning to read—they didn’t just magically appear out of thin air. And right then, I knew…absolutely knew…I would grow up and “make books.” And I never wavered from that decision.

For me, the process of writing a book is like following a trail of breadcrumbs through the forest. I get a glimpse of something—a character, a scene, and begin chasing it. I start at the beginning, and step by step, track the story and the characters through the labyrinth, through the dangers and illusions, through the snow and ice and driving rain.

Often I’m asked if I plot out my books. Here’s how it falls out for me: I know the basic elements of the overreaching story arcs that cross all the books in each series. I know the beginning, the highlights, and the very end of each book as I begin it. I write a 1-2 page synopsis and go from there.

The evolution of my books comes through the writing, hence—unlike some authors—I never write chapters out of sequence. Now and then, I’ll catch glimpses of things to come and I’ll jot down lines here or there, or notes on the synopsis, but I go crumb by crumb, following the trail the characters leave as they plunge into the deep dark forest.

I work in my subconscious for a number of things—subplots, especially. Sometimes I’ll write something and think, “What the hell is that all about?” and then, a chapter or three or five down the road, I’ll realize just what I was foreshadowing. My mind is constantly working—if not consciously, then on a subconscious level.

Not all writers work this way, mind you—but it works for me.

And now, a sneak peek from my next release, Shadow Rising—book 12 in the Otherworld Series. The series runs round robin through three sisters, half-human half-Fae, points-of-view. This book is from the youngest sister’s POV, a vampire.

Book Description:
We’re the D’Artigo sisters: sexy, savvy ex-operatives from the Otherworld Intelligence Agency. Being half human, half-Fae means our powers go haywire at all the wrong times. My sister Camille is a wicked-good witch, with three gorgeous husbands. My sister Delilah is a two-faced werecat and a Death Maiden. And me? I’m Menolly, a jian-tu turned vampire, and I’m dating a sexy werepuma and the godfather of vampires. Unfortunately, life is about to get very, very nasty…

Nerissa and I can’t decide on what we want to do for our promise ceremony and we’re bickering like an old married couple. My sisters and I head to Otherworld for a meeting with Queen Asteria, where we discover that Shadow Wing has dispatched Telazhar to reignite the Scorching Wars. And as soon as we return back home, we find Gulakah, the Lord of Ghosts, waging a battle to control the magical beings over Earthside. Caught between two terrible enemies in a battle spanning two worlds, we can only hope we’re in time to stop all-out annihilation.

“The fragrance of ylang- ylang and jasmine filled the room. Roman picked up the vial and opened it.

A strange smell filled the room, heady and intoxicating, making me lick my lips. I wanted to ask what it was but forced myself to remain silent. He carefully tipped it over the goblet and dropped
one . . . two . . . three drops of the coppery- colored liquid into the blood, then took the silver blade and stirred it. Corking the vial again, he put down the knife and picked up the goblet.

Turning to me, he dipped his thumb into the blood and pressed it against my forehead.

“I anoint you in the name of the First Mother.” Once again, he coated his thumb and this time he motioned for me to pull back the folds of the gown, exposing my chest. He pressed his thumb against my heart.

“I anoint you in the name of Blood Wyne, my sire and mother.” A third time, and this time he pressed his thumb against my lips.

“I anoint you in my name— Roman, Liege of the Vampire Nation, Son of the Crimson Veil.” He lifted the goblet to salute me, then drank half of it. Handing it to me, he nodded. “Drink.”

I swallowed the blood and it tasted like spice, like cinnamon and cloves and fire and copper. As it bathed my throat, the room began to spin; slowly but surely, I swallowed my fear with the crimson nectar.

And now, I’ll pick two winners from everyone who leaves me a question on Diana’s blog, and each person will receive a $10 online gift certificate to either Barnes and Noble.com or Amazon.com—their choice. Please leave your contact info in your comment so my assistant can contact you.

Thanks, Di, for hosting me!