As I’ve mentioned before, Jamie Lee Moyer has written Delia’s Shadow, a fabulous historical fantasy set in post-earthquake San Francisco. It has amazing characters, a real tangible and textured sense of history and place, romance, crime, ghosts, and a serial killer. I love this book. You should read it and tell everyone you know to read it. I asked Jamie to come visit and talk about Serial Killers. You know I have a fascination for them anyhow, but it’s even more interesting to think about how a turn-of-the-century detective might have gone about solving that kind of case. There’s no DNA, no computers, no trace . . . no CSI in the way we know it. Yet you’ll be amazed at what you see in the book. So without further ado, here’s is Jamie Lee Moyer: 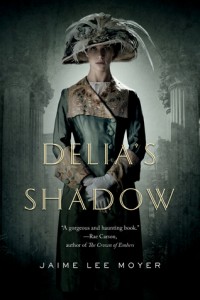 When I first realized that a serial killer was part of the plot in my novel, Delia’s Shadow, I started down a path that involved some intensive—and not very pleasant—research.  I knew a bit about serial killers from abnormal psych classes in college, from non-fiction books I’d read over the years, and watching crime documentaries. That was a good start, but not near enough.

Law enforcement’s definition of a serial killer is someone who commits a series of murders over a significant period of time, months or years, with a “cooling off” period between each killing. That cooling off period could be weeks, months, or even years.

I should probably confess here that I have a mild obsession with understanding what makes people do horrible things.  There were reasons I was a psychology major in college. The human mind, with all it’s twists and quirks, is utterly fascinating for me.

What transforms a seemingly normal child into a monster?  No one knows with absolute certainty what causes one little boy to disassociate to the point he thinks of other people as prey, while another child growing up in the same circumstances—doesn’t.  But researchers have come up with what appears to be a common trigger; childhood trauma.

This comes up again and again when reviewing the childhoods of serial killers. Many (most) were sexually, physically, or emotionally abused by family members. The loss of a parent or neglect is another common factor. Bullying and social isolation are other possible triggers.

One theory is that an abused child builds a fantasy world as a way of escaping the neglect or abuse he experiences.  He is in control and all powerful in his own world, and nothing can hurt him there. This fantasy world becomes the focus of his life, his everyday existence, and all development of a sense of right and wrong stops.

I said little boy for a reason. The vast majority of serial killers are male. Serial killers are rare to begin with, but only one in five or six of those are female. Why it falls out that way is another question without a firm answer.

The popular conception of a serial killer is of a lone, shadowy figure, with no social or personal ties to anyone. That isn’t always strictly true. Some are highly respected professionals, others were active in their church or community, holding good jobs and supporting families. How often friends, neighbors, and even family, expressed surprise, or described a newly discovered serial killer as “just an average guy” is really kind of scary.

I learned all about visionary, hedonistic, lust, control and so many other kinds of killers. The reasons these men kill are a whole other kind of scary.

My research took a turn then. I started looking at real life murders and profiles of the men behind them. The FBI files for a lot of high profile killers are available online via the Freedom of Information Act. Reading those files wasn’t fun, but if I was going to get “inside” the head of my character, I needed to learn as much as possible.

I’ve seen people speculate that the killer in Delia’s Shadow was based in part on Jack the Ripper. He wasn’t. There was a real life serial killer, The Zodiac, that terrorized the San Francisco Bay Area for years. He taunted the police and claimed many more victims than were ever found.

As suddenly as he started, The Zodiac stopped killing. He was never caught and never identified, although theories abound as to who he might have been. And I had to ask myself, what if he came back?

Then I had to ask, how would the police catch a killer before the age of computers, nationwide DNA and fingerprint databases, and modern forensics?

Especially if that killer was just an average guy.

Stories grow from bits and pieces, seeds of an idea and the shiny things writer’s collect. This mild obsession with human monsters, and innocence becoming evil, is just one of the seeds that grew into Delia’s Shadow.