Corgis are the cutest dogs ever. Here are mine, being spoiled and cute. 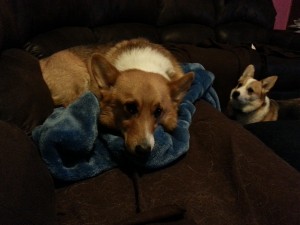 And then there’s this picture of Mount Shasta, near Weed, featured in Crimson Wind. If you don’t know about that, why not? 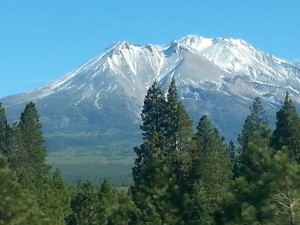 The man smashed his hand and finger today. I had to watch while he drilled two holes in the nail to release pressure. He wouldn’t let me do it. He didn’t trust me. Thought I might drill to the bone. He’s right.

I’ve been making progress on the end of Trace of Magic. Here’s a snippet (it’s rough and hasn’t even been proofed, so be kind):

We loaded up into a one ton SUV near the entrance. Price and Touray took the front and Josh and I got into the back. None of us spoke. Price was seething and Touray was icy. Josh had lapsed into total silence. I pushed him into his seat, bending his arms and legs like a stiff doll and buckled his seatbelt, more to keep him from freaking out and attacking the rest of us than anything else.

I hobbled around to my side and slid into my seat. I shut the door with a long sigh.

“I’m taking you to Maya,” Touray said to his brother as he keyed the engine over.

“We need a dreamer for Josh,” Price said. “The sooner the better. He’s in worse shape than I am.”

“He can wait. I want you looked after.”

“Go to Cass first. You can travel to fetch Maya.”

“Can I? My magic doesn’t seem to be working at the moment.”

Touray glanced over his shoulder at me. I shivered at the greed and speculation in the look. Like he was shopping and had just found a Picasso in a thrift store. Not that he’d be caught dead in a thrift store. But you get the point.

Sometime in the fight I’d swallowed the quarter. It was fast reaching its limits. Between sucking up the null field and the magic in the mountain, it was nearly overloaded. I shrugged at Touray because I had no idea when it would run out and when he’d get his powers back. I could deactivate it, but that would take a lot of energy and at the moment, I was fried. They could sort out what they wanted to do. I was just along for the ride at this point.

I leaned my head back against the headrest and closed my eyes. Mistake. I instantly became all too aware of my injuries. My entire body throbbed like Yosemite Sam’s thumb after Bugs Bunny wacks it with a hammer.  Fifty times the size it ought to be and pulsing like a pufferfish on crack.

Touray made a frustrated sound. “Fine. We’ll go to Cass. Where is she?”

“In a house on the top level.”

I felt his eyes on me again.

His voice was a little louder. He’d turned his head to look at me, too. My fingers twitched and I clenched them together.

“Too damned bad,” Touray said. “I’m not wasting time driving in this mess if I don’t have to.”

They started talking about the attack the building and what they needed to do to head off their enemies and pretty quick I drifted off to sleep. No dreams, thank goodness. Apparently my mind needed to rest as much as my body.

I woke up awhile later. We were still driving—if you could call it that. We inched along. Snow whirled around us. The headlights showed nothing but a wall of white. I wondered how Touray was even staying on the road.

Maybe he’d drive over the edge of the caldera and solve all my problems in one quick fall.

“Finally,” Touray muttered. He started to glow around the edges and the rest of him thinned so I could see through him. He began to speed up, following some sort of path his magic opened up to him.