I want to introduce you to someone. Everyone, this is John Hartness. John, this is everyone: 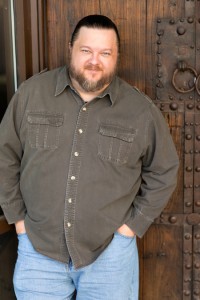 John is a writer. A good one. An entertaining one. I downloaded his recent The Black Knight Chronicles omnibus a couple weeks ago, and then he generously offered to let me read “Raising Hell,” his new novella. This is a story of Quincy Harker, who is a wizard, and who exorcises demons. His uncle is Dracula, and he’s got a guardian angel named Glory. He’s a smartass and while John points out the story isn’t funny, Quincy certainly has his funny moments. Morbid, but funny. So anyhow, if you can’t tell, I really liked this story. As in, read it fast and then started chomping at the bit for more. Which means I”ll be tackling that omnibus first thing this new year.

In the meantime, I wanted to tell you about John, and to let him speak a little about “Raising Hell.”

Here he is, in his own words:

Going to the Dark Side (there aren’t really cookies)

So most people, if they know me at all, know me as the funny horror guy. Or just the funny monster story guy. And that’s fine with me. After twenty-plus stories in the Bubba the Monster Hunter universe, and five novels in The Black Knight Chronicles universe, I’m pretty comfortable being funny.

Until I’m not. And sometimes I’m not funny. My short story “Fair Play,” which was included in The Big Bad anthology last year – not funny. Frankly, that story creeped me out a little, and I wondered about even publishing it. But then I decided that I liked the story a lot, and ran with it. So I’m not always funny.

Quincy Harker is not a funny man. His is not a funny series. It’s a dark world, more Batman than Elastic Man. Way more Tim Burton than Tim Conway (you young’uns go look that up). So this series isn’t funny. Sure, there are a few chuckles, a few one-liners. All my characters will have a certain level of snark to them, ‘cause how else could I write dialogue? But there’s a real level of danger with these stories. I don’t have much faith in the forces of good triumphing in these books, and bad things are going to happen to Harker and his cohorts, things that they might never recover from.

So why go there? If I’m happy being the funny dude, why go all grim on everybody? Well, for one thing – comedy doesn’t sell as well as the dark stuff. Funny stories are a weaker sell, and that’s the business part of writing a darker, grittier series. For another thing, I’ve never felt like I was only one kind of writer. I have a lot of ideas, and a lot of characters running around in my head, and some of them are pretty ugly. This series gives me a place to explore those darker nooks and crannies, and that’s part of the artistic side of writing a new series.

But the main reason I decided to write a darker series, featuring a part-vampire pseudo-immortal wizard is the same reason I write everything – the voices in my head wouldn’t shut up until I told their story. Quincy Harker needed to come out, to live on the page, and he wasn’t going to leave me alone until I wrote his story.

So I did. The first novella featuring Quincy Harker is called Raising Hell, and it releases on January 20. I hope you’ll click the cover below and pre-order, and I hope you enjoy it!

The year that was but not really

Third day of the new year