I just finished R.M. Greenaway’s Cold Girl. This is a mystery and a police procedural. It revolves around a disappearance–what happened to the pretty singer of a local up-and-coming Canadian band? The main characters are Constable Dion, who has survived a terrible car crash and a year later, is still not able to think the way he once did. Once a hot-shot detective, he’s now relegated to the backwaters of Canada doing scut work. The other main character is Leith, a detective who has been pursuing a particular serial killer and thinks that maybe this case is related.

What unfolds is a picture of a place–the cold remote back country of Canada where people eke out a living. It’s isolated and unrelenting and oh, so cold. In this tiny town, there are too many suspects. Pinning down motives and who did what and when is a difficult task. Worse, Dion has a terrible time articulating himself and he begins to perceive patterns and clues, but his memory and mind won’t work properly. He’s frustrated. Everybody is frustrated with him. He’s hidden his past, not wanting pity, so everyone sees him as inept at best, incompetent at worst. He quickly finds himself at odds with the other local law enforcement 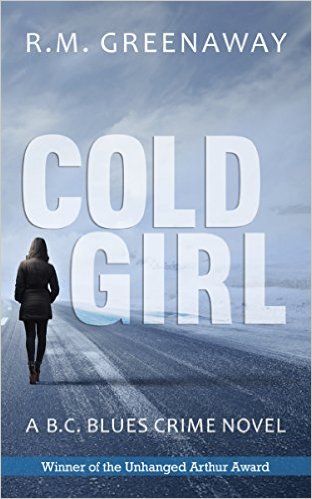 officers and scrutinized by his higher-ups.

Leith is feeling burned out, angry, and left behind. Even when he solves one major mystery, he’s left with more piling up. He’s not sure he’s happy in his marriage or his job, and he’s not sure what he wants or where he wants to be. But soon, the missing girl becomes important to him and he finds it imperative that he solves the case.

At first I wasn’t sure I was going to like this book. Neither Dion nor Leith are particularly likable. But they are fascinating. And watching Dion both fall apart and pull himself together at the same time is agonizing and yet I kept hoping for him. The mystery was somewhat slow to unfold, but then, while this book is about the whodunnit, it’s more about the characters searching and the place and the local world.

The mysteries (they build as you go) are tied up and a satisfying way. Less so are the characters. The ending is slightly muddy for me and I wish it was a little clearer. Two small things are dropped in and I just don’t know quite what to make of them. Also, a lot is made of Dion looking native, and yet nothing comes of it. I kept waiting for it to matter.

I do think this is a really good book and I enjoyed it. It comes out in March, so look for it.