I like Christmas romance, and especially this year, it seems like a good inoculation against the unhappiness in the world and the stress of life and the holidays. I picked up Eve Gaddy’s The Doctor’s Christmas Proposal off NetGalley. I really like Eve’s writing and expected to really like this book. And a lot of it I did. But one unfortunately central element kept bothering me and while it was addressed somewhat at the end, not enough for me.

So here’s the story (blurb off Amazon):

Betrayed by his ex-fiancée, Dr. Wyatt Gallagher turns to the one woman he can always trust – his best friend, Mia Watson. 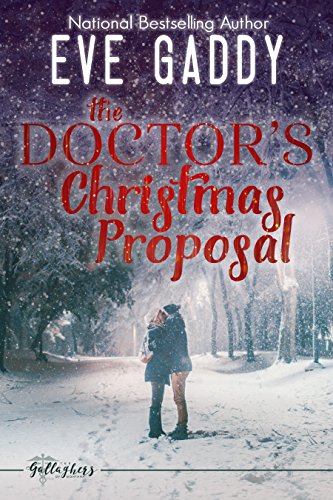 After moving away, Wyatt has realized he wants more than friendship with the beautiful artist. With that in mind, he convinces Mia to come to Marietta for the Christmas holidays. But wooing Mia is surprisingly difficult — especially given the passionate night they’ve already shared.

Though Mia Watson has loved Wyatt Gallagher for years, he’s always seen her as a friend, never a lover. Except for one unforgettable interlude when comfort turned to passion. Then Wyatt moved back to Montana, leaving Mia with an unexpected consequence of their night together–and soon, heartbreak to follow.

Faced with the fulfillment of her dreams, Mia knows she must reveal the consequences of their night together to Wyatt. But having withheld the truth for so long, will her confession destroy his trust in her, ending their friendship and any hope of a future together?

So obviously there’s some cool angsty stuff going on. Also, the setting is Montana, and having lived there for 15 years, I loved reading about it. From that third paragraph, you can guess that Mia got pregnant from Wyatt on their one night stand years before (which for her was not one, and for him–very confusing). More on that below.

The family and secondary characters were fun and interesting and warm. This isn’t a book of high drama, it’s quieter and more family focused. It’s a fairly gentle story in many ways. I liked Wyatt and Mia quite a bit and felt that their emotions and feelings for one another were real and strong.

Now this is going to be a spoiler, so if you don’t want to have that, don’t read more.

Mia’s main concern is that she never told Wyatt she was pregnant and miscarried and she thinks that lie is going to be unforgivable, plus she can’t have children, or so her OB told her at the time. Now she tried to tell him. After their night together and she discovered she was pregnant, she went to tell him, and before she can, he tells her he’s leaving town. Then he proceeds to never call her. When she decides she has to tell him, she miscarries. Now he’d had a rough break up with a woman who’d lied to him about being pregnant and he’d asked her to marry him though he didn’t love her. You can kind of see where this is all going. Mia fears at the time he’ll think she’s trying to trap him into marriage, and she loves him and doesn’t want that kind of marriage anyhow.

So here’s my issue. Sure she didn’t tell him. But she miscarried, so there was no baby. I don’t see why it’s so hideously bad, and that his behavior was far worse. He sleeps with her. Then he moves away without calling her. Then he calls her up out of the blue because he’s realized he’s in love with her. In the meantime, he’s dating other women–though apparently not sleeping with them. The point is, he is a far bigger ass than he ever believes he was and that really really bothers me.

So while I enjoyed the book overall, I was extremely irritated by the hero at the end, largely because he was so self-unaware. He mentions he should have been better, but hardly believes it’s anything like the magnitude of her lie. I just can’t buy it.

Talking about the Rogue Mage world