So as you might have heard (because I’ve been shouting about it), I have a short story, Ashes and Dust, in the soon-to-be-released Trials: A Rogue Mage anthology. Faith Hunter wrote three novels about Thorn St. Croix. She’s a neomage in a post-apocalyptic earth where seraphs have killed most of the earth’s population. There are those who believe the seraphs are messengers of God, sent to punish people for sins. Others believe they are aliens  (though those people hide because just saying so is sinful). There are a variety of magics and evil in the shape of the Dark–demons and fallen seraphs. Humans and the human world are the battle ground between the Light and the Dark.

Thorn is a neomage–which means she is forbidden to exist, except in what amounts to internment camps for neomages. She lives under the radar as a jeweler, but all too soon, bad things start to happen and she has to take serious risks.

I love this world. It’s so rich and strange and amazing. So I was excited to get a change to play in the world. I was also a little bit panicked. It’s one of the reasons I’ve never even considered anything like fanfiction–playing in someone else’s world means knowing everything about it, and writing in such a way that you’re faithful and don’t break it. I really loved the books, though, and I absolutely wanted to try. It helped that there’s an RPG game based on the world, and I could use the books for that as a reference. And of course, Faith herself.

The conditions of the story were that it could be set in any time pre, during, or post-Rogue Mage stories. I set mine slightly later, and across the country on the west coast. I had a pretty specific idea of what I wanted to do, and thought that it would be easier (and less likely to break the world), if I created my own place in the west where I didn’t have to worry all that much about previously described areas or people.

Writing the story was terrific fun. It flowed out of me fast and was too long. I did my best to cut a lot, but it still ended up on the longish side. Luckily there was room. I think the coolest part of the Rogue Mage world is figuring out how to fit in the world and still bring your own creative ideas to the table. You have to color within certain lines, but there’s still a lot of room for crazy colors and textures and shapes.

Mistral is my main character and what I like about him is that he doesn’t fit well anywhere. I’ve felt like that a lot in my life, and then I found my tribe. He’s looking for that, too, only he doesn’t quite know it. He wants to define himself and choose his own path. The thing is, others don’t exactly want to let him. His story is about standing up for himself and choosing the kind of person he wants to be.

Mistral is an unusual being, which accounts for why if anybody discovered what he is, he’d be dead meat. He’s born of a Dark 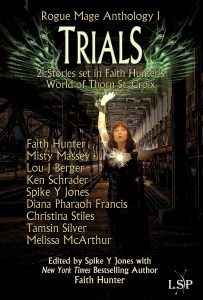 Mage mother and a captured seraph father. He’s kylen, with unique neomage powers. There’s no other like him in the world and that’s a tough thing. He knows he’d be hated by everyone if they knew, and so he has to hide. But others also want to use him as a tool for their ambitions. He despises both the Light and the Dark. For much of the year, he travels as a ti

nker and trader. For the rest of the year, he suffers at the hands of an evil master.

When I got to the end of the story, I loved it for approximately 5 seconds. Then I was sure it was a big pile of stinky poop. I was sure it moved slowly, that it wasn’t any good, that it was a dumb plot, and that the whole thing needed to be scrapped. (All of which is pretty typical of finishing things for me). Faith, though, seemed to think it was pretty good. I had some kinks to work out where I’d crossed lines I couldn’t cross–world facts, for instance–and I had to revise my prose, but mostly the story in the anthology is as it was when I finished.

I was also really happy with the ending. A lot of the time writers tell stories by feel. What I mean by that is we are searching for that ending that clicks and says more than just the simple plot. That it delves into character and makes the story robust and interesting in ways that weren’t clear until the end. It’s like going through maze and looking back to see that

all those little twists and turns were really a glorious pattern.

Now I need to go back to work on finishing my fourth Diamond City Magic book, which remains untitled. It’s so close to done, but I’m looking for that ending that clicks, and I have a feeling that a little farther away than I hope it is. I feel the story coming together toward that finish, though, and I’m super pleased about it.

I also am working on the second Mission: Magic book, and I just turned in a Horngate Witches story for an upcoming anthology. It jumps about four years after the end of the last book. And then I got blindsided by a dream last night that is parlaying itself into a book idea that I think is pretty awesome, but needs to be fleshed out a whole lot more.

Here’s a little snippet from the story:

They’d not gone much farther up the rutted road — perhaps a mile — when Ebet emerged from the shadow of a tree. He moved into the center of the road to face Mistral, his movements flickering fast. The daywalker was inhumanly beautiful, with black hair that hung to his waist and a lithe, muscular body. They were all of a kind — black hair, slender, piercing eyes, and Michelangelo faces. And evil.
“You are late for your lessoning,” Ebet said, his voice sweet as a clarinet. “The master grows anxious.”
“The roads washed out south of the delta. I was trapped on the wrong side.” The floods and delay were not news. Nor did they make the delay forgivable.
Ebet dipped his chin, a slow, vicious smile curving his mouth. “I am to remind you to hurry.” He lifted his hand and held it out. Dangling from his fingers was a collar.
Mistral blanched despite himself.

If you’d like to order Trials, here’s a quick link to Amazon. You can preorder now, and it releases on November 28. I’d love to hear what you think about it.