Three days ago I had a gastric sleeve surgery. What that means is that they take out part of your stomach. It also means not being able to eat much and figuring out the new signals from your body. But I digress.

The surgery itself went mostly well. The only hitch at all, in fact, was the first IV attempt didn’t go well. So anyhow, I came out and got into my room and was very sore, but it was manageable. My greatest issue was with having trouble with nausea, but mostly that was controlled with some drugs. I actually managed some sleep in the nighttime, but there were a lot of little alarms I managed to set off–accidentally calling the nurse, bending my elbow and kinking my IV, going to sleep and having my O2 go down. 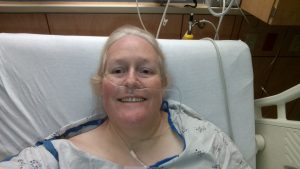 So I was released the next day after doing all the required things in terms of body function, like drinking, ‘eating’ thick liquids, going to the bathroom, and walking around. The trip home was kind of miserable because we left the hospital at 4 and of course rush hour had already begun so the trip took longer. Oh, and I found out that every little bump made me hurt. But I got home and was so happy to see the kids, the dogs, and my own freaking bed.

The next day, yesterday, I felt a whole lot better. I did some walking as required (and because I wanted to), and then I managed to get down most of the protein I needed (the focus on eating is on protein), and I managed to get all my hydration in. All of these things were a bit of a triumph.

Today, I feel even better, though still sore and still figuring out how to eat. The doggies are delighted to snuggle up to me and in fact a couple of minutes ago (as I type this on my laptop on my couch with Voodoo fastened to my side and Viggo just on the other side of him), Voodoo has been giving his brother a little tiny low growl to tell him that he doesn’t like his brother invading his territory and taking mom’s attention. It’s really kind of funny because as soon as he does that, he then apologizes by licking Viggo’s face and ears. It’s cute.

I know from research (and now experience) that you end up with a lot of gas inside your chest cavity from the stuff they pump into you during the surgery, and gas in your stomach/intestines from the air they pump into your stomach. I had some pain, but mostly it felt like nausea and an aching in my chest. That has passed so I’m really happy.

In other news, we’re going to have to go on a road trip for Christmas. We’ll be going to California to visit family and help the Man’s dad with the Man’s uncle’s belongings (his uncle recently passed and his dad needs some help. The Man went down over Thanksgiving, but there’s still more to do). I should be well able to make the trip by then. Everybody down there is worried about what I’ll be able to eat and how much I’ll miss out on from not being able to eat and I’m totally not worried about it. I don’t know if that will change. I don’t know if I’ll end up missing foods hard, but right now, I’m not jonesing for anything and don’t anticipate it. I’m not worried about not being able to drink alcohol (I don’t drink much anyhow), and mostly I’m looking forward to seeing everybody and taking walks through the oak groves near my parents’ house.

One thing that’s odd is burps or the need to burp seems to signal a ‘stop eating now’ flashing sign. It means my stomach is too full and I need to wait to eat.