Previously I talked about attending a murder trial. If you haven’t read parts one and two, I’ll give you the links to those pages. 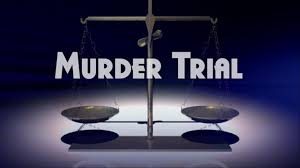 What follows are the next two parts.

In Part I and Part II, I talked about things I’d learned and the initial testimony of the coroner, first cops on the scene, and the investigating detective.

Now a cybernetics and forensic sound detective was called to the stand. A lot of time was spent establishing in credentials. He had degrees in his field and he’d trained with the FBI and CIA, plus taken a lot of post graduate classes. He knew his stuff.

The reason he was called was because of Sparky’s phone, that as I said before, was found on the counter. It was an iPhone, and at first the police couldn’t get into it. About a week after the murder (and I’m calling it that because he was convicted), a member of her family produced the code and unlocked it.

That’s when they discovered the recording.

Now, this was interesting for me because I hadn’t heard any of the opening statements earlier that day, and so I had no context for the recording. I’m fairly certain the prosecution laid out its narrative of what happened in the opening, as did the defense, and so I think the jury must have had some context.

The detective was questioned about how he worked with the phone and how he took the recording off it. He talked about putting it into a Faraday Box so that it couldn’t transmit or receive any transmissions, and then went into technical detail about how he processed the phone.

Eventually, they got to the recording, which they proceeded to play. I’ll tell you more about that soon. Then there was an attempt to present an “enhanced” recording, which the defense objected to (they didn’t object at all to the recording’s initial presentation). Their argument was essentially that the enhancement would prejudice the jury (the jury had been removed from the courtroom for this objection argument). The prosecution argued that this was no different from photographs with arrows and explanations provided by investigating detectives.

The reason that they wanted the enhanced recording was because certain things on the recording could not be heard on the courtroom’s sound system. What the detective said was that in his sound room, with high end speakers and no exterior sounds, things could be heard that couldn’t be heard on the court speakers without pushing the gain and things like that. Basically, he was amplifying certain sound waves to make them more audible.

The judge ruled in favor of the prosecution. The jury came back in and then the enhanced recording was played. I’ll admit I didn’t hear a lot of what had been enhanced, but here’s the sequence.
One thing that wasn’t clear at the beginning was how much of the beginning of the recording had been cut that we didn’t hear. We learned that later. But I’ll get to that soon.

So first we hear a knock on the door. No one answers. Then the door opens and we hear footsteps. Maybe six or seven. Then we hear two quick shots and a gasping sound, and then the body hits the floor along with the phone. Then six more shots.

Then there are sounds and the phone is picked up. There’s swearing and the sounds of numbers being punched into the phone and then the cabinet getting kicked or the counter getting hit. After that, there are several minutes of walking through the house and more sounds near the phone, and more muttering and swearing. And then finally he calls the police.

Jason sounds panicky, though when he’s walking through the house he seems very calm. He says he’s killed his wife, that she wasn’t supposed to be there, that she attacked him with a knife. The operator talks to him and he claims he’s checking her pulse and she’s not breathing. He says he shot her eight times. The operator tells him to go outside and wait for the police to arrive, and we can hear the sirens, and then voices signaling the arrival of the police. What’s interesting is that we can hear the operator talking to dispatch and the dispatch talking to the officers. It was kind of surreal.

So that was the recording and the main evidence. As I think I mentioned at the beginning of all this, the reason I was at the trial was because my husband had been called by the prosecution to testify. I couldn’t be there for that, as he wasn’t called that day, and I couldn’t come back the next day.

But he’d been talking to Jason about Sparky and the difficulties in their marriage, and then at one point Jason (my husband thought jokingly and still does), asked a fellow hispanic employee if he knew any gang members. This is what they prosecution wanted to ask about. The implication being that Jason was looking to hire a hitman.

Next time . . . The defense story and my problems with their narrative.

All right, so last time I talked about the recording and the murder. Now I want to talk about the defense story of what happened and why I had such issues with it.

I read this in the paper, so I don’t have the details I might have if I’d been there, and I wish I could have been.
So what the story of the defense is as follows . . . .

It was Valentine’s Day. Jason and his girlfriend (who, in soap opera style, was the maid-of-honor at their wedding, and in news that doesn’t matter, her boyfriend was Jason’s former best friend), had decided to take his young kids to a Valentine’s breakfast at McDonalds before he went to work. However he had a bout of IBS and sent them without him and then called into work and said he couldn’t go.

He says that Sparky shows up after his kids are gone and they get into a huge fight and she threatens him, grabbing the bread knife to do it, and then storms out with it. Fearing she’ll return, he goes to get his pistol out of the gun safe which is why he has it. He claims that she returns a short time later, comes in with the knife and attacks him, and then he shoots her.

I had a number of problems with his story. First, I found it very hard to believe that he and his girlfriend would be taking the kids to McDonalds before school and before Jason left for work. Here’s why. He began work at 7 a.m., so he had to leave an hour early to get there. That means he had to get his two kids, ages somewhere between 6-10, out of bed and to eat before that. As a parent, I found that very difficult to believe.

Then there was his timeline. He didn’t text in to say he wasn’t going to be at work until after 7 (something my husband’s boss was called to testify about). So he knew he wasn’t going to work as early as six when he’d have had to depart, but doesn’t text his boss until after he was supposed to be there. Incidentally, the murder happened around 7 a.m.

Then there was the recording. She walks in and goes a few steps and there’s gunshots. No talking of any kind, no fight, no sounds of her attacking him with a knife.

Why was her phone on the counter? She was holding it as she walked in from the sound of things on the recording. You could hear it hit the floor when she fell. And along the same lines, why was the knife so loose in her hand when the backpacks in the other were so tight they had to pry out of her hand?

But there were a few other things that I haven’t mentioned. She’d made a habit of coming to pick up the kids before school when he wasn’t home, even though she wasn’t supposed to. I don’t know if that was a legal agreement or not. Apparently this made Jason very angry.

He’d switched vehicles with his dad the night before, saying he needed his dad’s truck. He left his car at his dad’s house. That meant Sparky had no idea he was home because the car wasn’t there.

But the big kicker was that this wasn’t the only recording. She’d recorded 12 other visits prior to this and the prosecutor played the first minutes of each time. They were the same. She knocked on the door and either walked in, walked down the hallway and talked to her kids and their grandfather—Jason’s father—(who seemed to always be happy to see her), or he answered the door and let her in.

Twelve times. Then on number thirteen, she walks in and gets shot. If she was planning to attack him with a knife, why carry the backpacks? She expected obviously her kids to be there, which suggests she wasn’t planning on a fight. Second, why record if she was about to commit a major crime like assault or murder? Makes no sense.

I find it difficult to believe that this wasn’t a premeditated murder. He got his kids out of the house. He made sure his car wasn’t there to warn Sparky. He lay in wait with his gun in the kitchen behind the refrigerator so he could shoot her as soon as she came out of the hallway. From the recording, she didn’t see him. He shot her before she knew he was there.

I do wonder if I’d actually heard the defense and heard him on the stand, if I would have believed him. But I don’t know how he would have explained away the problems I see.

So that’s it. The whole part of the trial I saw and what I learned about later from reading the paper about his testimony.

This is a link to one of the accounts that includes a summary of his testimony.