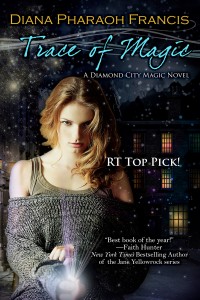 Even the most powerful tracers can’t track you if the magical trace you leave behind is too old. But I can track almost anything, even dead trace. That makes me a unicorn, the Tooth Fairy, the Easter Bunny, and the Loch Ness Monster all rolled into one. In a word, I am unique. A very special snowflake. And if anyone ever finds out, I’ll be dead or a slave to one of the Tyet criminal factions.

Riley Hollis has quietly traced kidnapped children and quietly tipped the cops to their whereabouts one too many times. Now she’s on the radar of Detective Clay Price, a cop in the pocket of a powerful magic Tyet faction. When he blackmails her into doing a dangerous trace for him, Riley will have to break every rule that keeps her safe. Or become a Tyet pawn in a deadly, magical war.

Praise for Trace of Magic:

“Diana Pharaoh Frances has crafted a winning paranormal mystery that mixes sizzling sex, magic, and a decades old search for artifacts that could change their world.”
—Jeanne Stein, Bestselling Author of The Anna Strong Chronicles

A week later, I walked into the Diamond City Diner a little after two in the afternoon. I’d spent the night before following a carpet cleaner who was stealing supplies from his boss. I’d slept a few hours after tracking him to his storage unit, then turned in my report and collected my fee. I hadn’t eaten since lunch the day before and I was starving.

Patti glared at me when I walked in. “You look like shit.”

I had not grounds to argue. I hadn’t been sleeping well the last week. Nancy Jane and her mother had been rescued alive. I should have been over the moon. Instead I couldn’t shake the feeling that something was very wrong. I spent hours reinforcing my nulls and I’d taken to carrying my gun everywhere I went, along with the Chinese baton I hid in my sleeve. I usually kept one or the other on me, but tended to leave them behind when I went shopping or to going to visit my family. Not any more.

“Thanks. I spent hours on this look.” I was wearing my hair in a ponytail, with my usual uniform of jeans, hiking boots, a long sleeved shirt, a heavy jacket, a hat, and gloves.

“It’s cold out there. Got anything to eat?” I asked, unzipping my coat and stuffing my gloves and hat into a pocket before hanging it on a hook fastened to the bench of my usual booth. A snow storm had moved in, the first of several to come, all piled up like cars stuck on an LA freeway. By the time they were done with Diamond City, we’d be buried.

“Hold your horses, Laraby.” Patti glared at the dentist who was waving a check at her. “I’ll be there in a second.” She grabbed a clean coffee cup off the counter and set it down in front of me and filled it. “I’ll get you something to eat.”

Ten minutes later she returned carrying a white oval plate mounded with an omelet, hashbrowns, pancakes, and a half dozen slices of bacon. I didn’t want an omelet, but Patti tended to get me what she thought I needed, not what I wanted. It was loaded with vegetables and cheese. Tasty, but not the burger and fries I was craving. Arguing wasn’t going to do me any good. I’d eat what I was given and try to look happy about it.

“Give me a few minutes,” she said. “We should slow down soon and I’ll join you. People are trying to get home before the weather gets too heavy.”

I glanced through the front window. Snow was falling in a thick curtain of fat flakes. Already the ground was white. I was willing to be there’d be an inch or two on the ground by the time I finished eating. Giving lie to her promise, the door jingled and half a dozen people came in, stomping their feet and dusting the snow off their clothing.

Patti zipped off to help them. I cleared my plate and immediately wanted a nap. I considered heading upstairs. Patti kept a room for me in her apartment. I spent two or three nights a week at the diner, sometimes more, depending on the jobs I had. Right now I didn’t have anything lined up. I was planning to hit the grocery store and go home and hole up until the storms blew themselves out.

I took my dishes to the bus tub, waving at Ben, Patti’s partner in the diner, through the kitchen window. I grabbed a pot of coffee and topped off my cup before sliding back into my seat. I didn’t bother looking up with the bell on the door rang again. I was checking the weather radar on my phone.

A shape loomed over me suddenly and Clay Price slid into the seat opposite me. My mouth dropped open. As far as I knew, he’d never even set foot in the diner before.

He slid my coffee out of my hand and took a sip, then eyed it in surprise. “That’s good,” he said.

“Not to mention it’s mine,” I said, eyeing him balefully.

He set the cup down, then ran his fingers through his hair. He was he carefully controlled type, so his gesture startled me. I examined him. He didn’t look any better than I did. His eyes were sunken and grooves cut deeply around him nose and mouth.

“You know, if you’re hungry, there are other tables. Empty tables,” I pointed out.

He sipped my coffee again. “But you’re not sitting at the other tables.”

A frisson of foreboding rippled through me. I shivered. It had nothing to do with cold. “You came looking for me?”

“I knew you were a smart woman.”

He pulled a manila file from inside his leather jacket and set it on the table. “I want you to do a trace for me.”

Like I said before, my cardinal rule is not to be stupid. Taking a case working for Price—a cop and a Tyet enforcer–was the dictionary definition of stupid. Insane even. I didn’t even think before I said, “no.”Save

Check out the rest of the Diamond City Magic books. 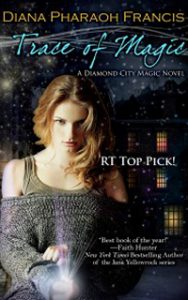 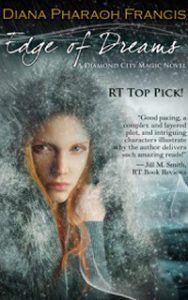 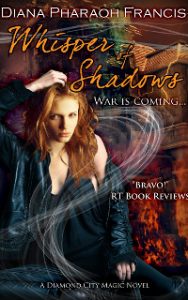 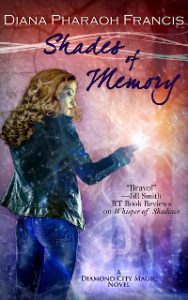