A little while ago, I was asked to read with the possibility of blurbing Krista Ball’s new book, What Kings Ate and Wizards Drank. It is currently available in electronic form and will shortly be available in print form. I LOVE this book. It’s one of those that you read slowly to savor and mark up a bunch for notes. It’s not just excellent for researching books, but just learning cool stuff. I talked Krista into doing some blog posts here (twisted arm, whatever) and she kindly agreed (feared for her life). 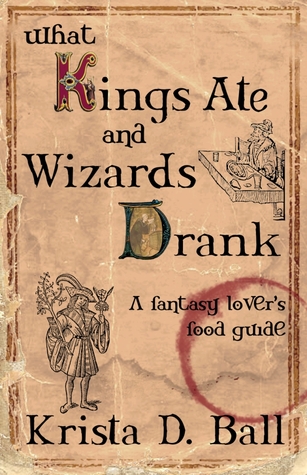 According to her mother, Krista D. Ball tells lies for a living. She is the author of several short stories, novellas, and novels. Krista incorporates as much historical information into her work as possible, mostly to justify her student loan payments. Whenever she gets annoyed, she blows something up in her fiction. Regular readers of her work have commented that she is annoyed a lot.

A link to Krista’s publications.

So without further ado, here is the first visit from Krista:

Beer, Brains, and Butter: My Adventures with Historical Food

I love food. I mean, who doesn’t? We all have a favourite food or a family recipe. Many of us have special attachment to the way Grandma made something and, try as we may, we can never replicate that same meal even when following her recipe. But why do we feel that way?

We don’t need elaborate cakes, cookies, and meat pies to live. Yet, every culture throughout history has developed different local tastes and preferences that eventually developed into regional and cultural identities. Food is much more than just mere survival; it is an extension of who we are.

It is this history and culture surrounding food that has always fascinated me. Bread riots, starving soldiers, Corn Laws: all of this tells us so much about what it means to be human. Whip a man and he’ll continue to obey your orders. Stop feeding him and he’ll desert to the enemy. Don’t pay the peasants and they’ll grumble; tax their grain and they’ll storm the castle.

It was early 2011 and I was neck-deep in writing the second book of my epic fantasy series when Tina Moreau of Tyche Books called me up to chat. We knew each other, so this wasn’t too crazy or anything.

Tina “casually” mentioned that I should write a proposal for a fantasy writer’s guide about food. Oh my. I’d been threatening to write something along those lines for quite a while, but never got up the courage. I ended up running my ideas by some writer friends, who then threatened to tie me to a chair if I did not submit a proposal. So, I wrote out an outline and the rest is history.

Over the next few weeks, I’m going to chat about researching and replicating old recipes and skills (including grinding my own flour with rocks), and what it was like reliving some of the past.
Here are one of the fun recipes from the book:

Plumb Porridge (Okay, I asked if it was really supposed to be spelled with a -b- and yes, it is–note from Di)

Boil a leg of beef in ten gallons of water until tender. Strain out the broth, wipe the pot, and put the broth back in. Thinly slice six small loaves of bread (cut off the top and bottom) and pour some of the broth over into the bread. Let it sit for 15 minutes, then put the bread into the pot and boil for 15 minutes.

Add five pounds each of currants and raisins, and two pounds of prunes, along with three-quarters an ounce of mace, half an ounce of cloves, two nutmegs (all ground together and mixed with cold stock). Stir into the broth and bread.

Remove the pot from the heat and add three pounds of sugar, salt to taste, a quart of sack (sweet white wine imported from Spain), a quart of claret (a type of red wine from Bordeaux), and lemon juice. Serve.

What are some of your favorite food memories? Please share!
~~